A year in review: The stories that struck a chord in 2019 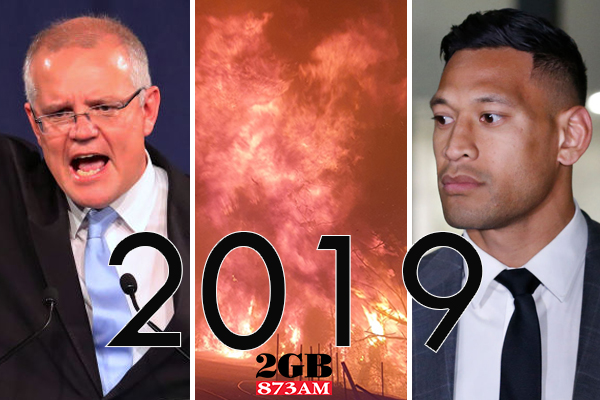 Our farmers struggled, our state burned. Christchurch mourned and the world looked on as Notre Dame went up in flames. The ‘quiet Australians’ prevailed in an unexpected election result. Here are the stories that captured your attention this year.

One of the most covered topics on 2GB this year was the plight of our farmers, who continue to struggle through the worst drought in living memory. Alan Jones relentlessly campaigned on behalf of those living in rural areas, even taking the Prime Minister to task over the issue. One dairy farmer emotionally told Alan how he’d been run into the ground by the major supermarkets and was forced to sell the last of his cows. A Queensland cattle farmer was even terrorised by vegans who illegally stormed his farm.

There were some incredible breakthroughs for our drought-ravaged farmers. Ben Fordham tirelessly campaigned on behalf of farmers who were facing bankruptcy for clearing their own land. After months of pushing for relief for those being prosecuted, the government announced anyone being investigated under the draconian laws would be cleared. Ben also organised a huge surprise for 11-year-old Jack Berne, who’s raised over $1 million for our farmers. During an in-studio interview, the Prime Minister jumped on the phone to thank him for his incredible work!

International tragedies were covered extensively on the airwaves this year. We mourned with New Zealand when a gunman opened fire on two mosques in Christchurch in March. A 28-year-old Australian man was arrested and charged with 51 murders after the terror attack. Iconic Paris cathedral Notre Dame went up in flames as the world looked on. A passionate argument erupted on-air and online when former prime minister Malcolm Turnbull suggested Australians should chip in to help rebuild the church. In December, another tragedy rocked New Zealand when the White Island volcano erupted, killing at least 17 people, many of them Australians on a cruise ship holiday.

It was a huge year for Scott Morrison, who thanked the “quiet Australians” after winning a surprise victory in the May federal election. Former prime minister Tony Abbott lost his seat of Warringah, spelling his retirement from politics. He later reflected on his 25-year political career with Ben Fordham. Jim Molan lost his Senate seat despite becoming the most individually voted-for politician in Australian political history. He later returned to the Senate after being chosen to fill a vacancy.

It was a big year in state politics, with Premier Gladys Berejiklian securing another term for the Coalition. During the campaign, Labor leader Michael Daley made headlines when he threatened to sack Alan Jones from the SCG Trust if elected. Abortion was legalised in NSW after extensive debate both in parliament and amongst the public. A man was charged after he was filmed spitting on an anti-abortion protester. Ray Hadley also campaigned for criminals to be forced to undergo blood tests if they bite or spit on emergency service workers. The government finally listened, announcing on Ray’s show they would bring in the mandatory testing.

A fierce debate about freedom of speech and religion erupted when Rugby Australia ripped up Israel Folau’s contract for a social media post stating hell awaits homosexuals. In his first interview after his sacking, Israel Folau spoke to his long-time supporter Alan Jones.

Australians were at loggerheads over a Sri Lankan asylum seeker family from Biloela who are facing deportation. Our own presenters had vastly different views on the matter. While Alan Jones has continuously maintained the family should be allowed to stay, Ray Hadley argued they are not genuine refugees.

Notorious serial killer Ivan Milat died in October. Although Milat tried to get taxpayers to foot the bill for his funeral, the Corrective Services Minister told Ray Hadley “hell will freeze over” before he allowed that to happen.

The end of the year was dominated by devastating bushfires that continue to rage through NSW. In our most-read article of the year, an RFS volunteer was charged with starting seven bushfires. A devastated firefighter rang the station in tears at suggestions they’d “failed” to save the small town of Balmoral. And two volunteer firefighters tragically lost their lives when their truck hit a tree.

In a year full of highs and lows, our relationship with our listeners was stronger than ever. When a 2GB listener spotted a woman wanted on suspicion of murder, he called Ben Fordham as the police arrived to arrest her. The openline went into meltdown when Ben called out a lying P-plater live on-air. When dozens of cases of VB spilled all over the Pacific Highway, listeners were desperate to find out where the accident had taken place (for completely innocent reasons, of course). We all had a laugh when Ray Hadley was crowned Australia’s Hottest Radio Hunk for 2019 after an extended campaign. And an in-studio performance by Ray’s musical discovery of the year, Mr Cowboy 62, became our most-viewed video on Facebook.

As Alan Jones says, our listeners are our best researchers. Thank you for listening (and reading) in 2019.