‘Thanks for your service’: Michael Daley threatens to sack Alan Jones if elected 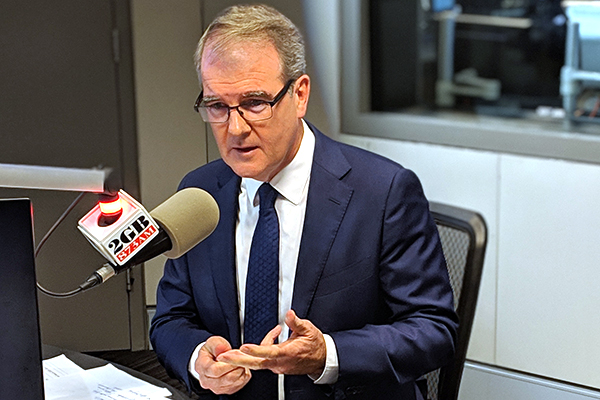 With just over two weeks left until voters head to the polls, Mr Daley joined Alan in the studio for the first time, with neither man taking a backwards step.

Alan grilled the want-to-be premier over his promise not to rebuild Allianz Stadium, despite independent reports saying it’s not safe to continue as is.

Mr Daley claims the SCG Trust, which runs the stadium, isn’t telling the truth about the risks.

“That’s one of the reasons Alan why I’m going to sack the board,” he says.

Alan is the longest-serving trustee in the not for profit organisation’s history but took the threat in his stride.

Mr Daley didn’t let up, ending the interview with one final jab.

“That’s fine, but the board will go. It will be sacked. I’m sorry about the SCG Trust Board, thanks for your service.”

Following the interview, Michael Daley’s office released a statement confirming he would sack the majority of the SCG Trust board.

The only Trustees who would escape the sack are Phil Waugh and David Gilbert, who were elected by SCG members, and Stuart MacGill.

.@michaeldaleyMP doubles down on promise made to @2GB873 to sack most of the SCG Trust, but hasn’t decided when or how they’ll be replaced pic.twitter.com/fvUymaGzU4

Michael Daley and Labor will require a better range of expertise and representation on the board of the SCG Trust and will replace the current board.

Labor wants to bring the Board from the 19th century into the 21st century and ensure it acts in the interests of all of the people of NSW and those that follow their respective codes.

A Daley Labor Government will replace the unelected members of the SCG Trust Board and appoint a new board that will better reflect the diversity of the sports loving people of NSW.

The board’s current plan to knock down and rebuild Allianz stadium is not in line with the expectations of the people of NSW and is not in the best interest of sporting fans.

The trust has colluded with the NSW government to spend $730 million of taxpayers’ money on an unnecessary stadium instead of schools and hospitals for the people of NSW.

The two board members who were elected by the SCG Members, Phil Waugh and David Gilbert will remain, as will former test cricketer Stuart MacGill.

In the interview, Mr Daley claimed there’s no fire sprinkler system in the stadium because the board “ripped them all out under the cover of darkness”.

But the SCG Trust has since come out swinging, saying the statement is completely untrue.

“The accusation is incorrect.

“I don’t know where his information came from.

“We are bipartisan, we don’t play political games we just try and do our job as well as possible.”