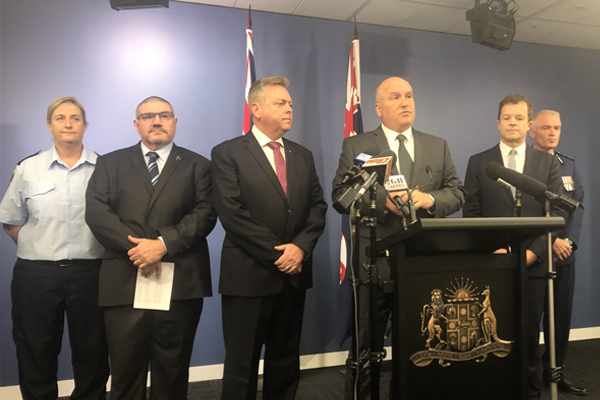 After years of fighting, Ray Hadley has won his campaign to force criminals who bite emergency service workers to undergo blood tests.

The state government has finally agreed to bring in mandatory testing for anyone who bites or spits on frontline workers.

Currently, a criminal can refuse the tests, meaning victims have to wait up to six months to find out if they’ve been infected with diseases like HIV and Hepatitis.

During this period, they can’t be intimate with their partners for fear of infecting them.

“This is common sense at the end of the day. They’re entitled to the peace of mind that comes with a swift test.

“Where there’s an attack the rights of the frontline worker trump those of the attacker.

“We want to protect those who protect us.”

Full announcement from the NSW Government:

People who bite or otherwise expose police and other frontline workers to a risk of disease could be subject to mandatory testing to provide peace of mind and lessen the anxiety for affected workers.

The scheme will provide authorities with the power to test a person for diseases if there is a risk of an on-duty frontline worker being exposed to a blood borne virus such as HIV, hepatitis B or hepatitis C through the deliberate actions of another person.

Mr Elliott said our police officers, emergency services personnel and first responders put themselves in harm’s way every day, and it is vital we support them as much as possible.

“We want to give as much peace of mind to frontline workers as we can to alleviate the uncertainty they may experience if have been exposed to bodily fluids,” Mr Elliott said.

“Our Justice and Health ministers have been working hard on the details of this scheme, with the help of strong advocates like the Police Association and the Public Service Association, so I’m happy to say we are delivering.”

If frontline workers are exposed to a risk of contracting a blood borne virus in the course of their duties by a deliberate act of another person, a senior officer from their agency will carry out a risk assessment to determine if the source of the possible infection should be ordered to undergo mandatory testing.

Mr Roberts said working with prison inmates is stressful enough without our Corrections Officers worrying about their health after attacks that expose them to bodily fluids.

“These incidents can be extremely traumatic and stressful for our officers and their families, and mandatory disease testing will provide support. We will also ensure they receive prompt medical assessment, treatment and counselling,” Mr Roberts said.

Mr Speakman said anyone who refuses to comply with a mandatory testing order will be committing an offence.

“We need to provide a real deterrent so people who think it’s okay to attack our frontline workers know they will face the full force of the law. Courts will have the power to impose on those who refuse to undergo a test a maximum of 12 months imprisonment or an $11,000 fine, or both,” Mr Speakman said.

If either the victim or the person to be tested disagree with the decision of the senior officer, they may appeal within 48 hours to the NSW Chief Health Officer who must make a decision within seven days.

If the individual in question is younger than 16, or subject to a guardianship order, a parent, guardian or Local Court must approve the mandatory disease testing order.

The Government aims to introduce legislation early next year.