Superglue protestor strikes again, this time in a canoe

Traffic on one of Brisbane’s busiest bridges has been brought to a standstill by climate change protesters in a canoe.

The four activists from the global Extinction Rebellion locked themselves together inside the canoe on Victoria Bridge in the morning peak hour.

Queensland Police were able to move the canoe in a matter of minutes but it took significantly longer to remove the protestors. 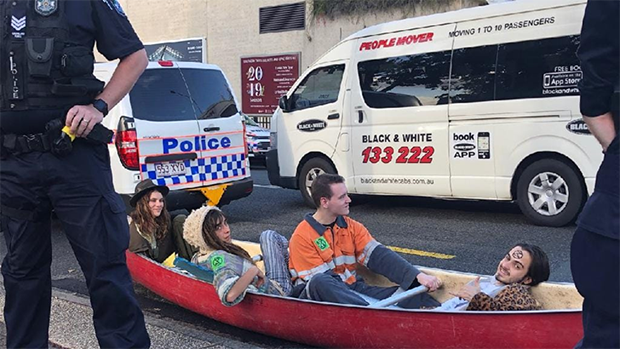 In the statement, the group also warned the upcoming “Rebellion Day Brisbane” planned for August 6 will “see major disruptions and large numbers of arrests.”

One of the men is the same person responsible for shutting down Brisbane’s CBD last Tuesday.

19-year-old Eric Serge Herbert and a woman superglued themselves to a main road, telling reporters they were “rebelling against the government’s planned genocide of the human race”.

Federal Minister Peter Dutton weighed in on the latest disruption for Brisbane commuters, saying the Queensland government must show some leadership.

“There needs to be proper penalties put in place and a deterrence for these people.

“You can’t have these people bringing a city to gridlock.”

Superglue protestor is the dud triplet of some very successful sisters

‘Get a bloody job’: Ray Hadley slams Adani protestors who superglued themselves to road