A Sydney RSL has been caught lying as it tried to blame police and “terrorists” for cancelling its ANZAC Day dawn service.

Ray Hadley was sent a community notice published by the Glenorie RSL, notifying local residents that the annual service has been cancelled for 2019. 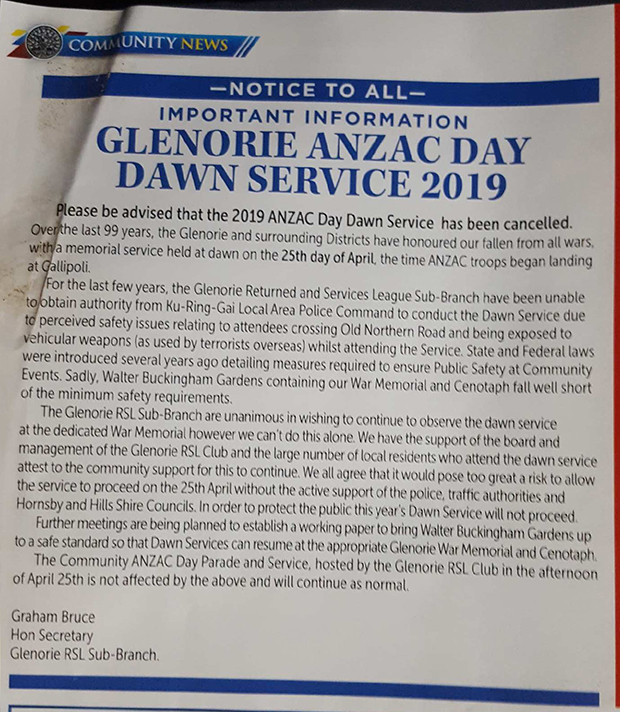 The community notice published by the Glenorie RSL

The notice makes some very serious claims, saying police have withdrawn “active support” for the event and that it would be “too great a risk to allow the service to proceed”.

It also mentions a “perceived safety issue relating to attendees… being exposed to vehicular weapons (as used by terrorists overseas)”.

Disturbed by the claims, Ray promised to contact police and find out why they wouldn’t allow the dawn service to go ahead.

But, it turns out the claims made by Glenorie RSL Honorary Secretary Graham Bruce are far from the truth.

NSW Police had, in fact, received an email from Mr Bruce on March 18, revealing a very different reason for the Anzac service being cancelled.

“The intent to hold it at the RSL Club fell through when a faction of the community decided to hold there own Service at the Memorial Hall.

“Holding 2 services at the same time would split the community, therefore the RSL Sub-Branch decided to cancel it’s support, endorsement and involvement to any Dawn Service this year.”

Ray Hadley has called out the disgraceful deception by Graham Bruce and issued his “apologies to the police involved”.

“Graham, when you go into print and tell locals the coppers are at fault for cancelling it, you forget to tell everyone it was a factional dispute.”

“It’s got nothing to do with the police and traffic control.”