Police are in place around the Sydney Opera House, in anticipation of a planned protest over a light show for the Everest Horse race.

The numbers and colours of horses will be beamed onto the sails at about 8pm, revealing the barrier draw for the race.

Critics say the display is an assault on the building.

2GB reporter Stephanie McLean is there and tells Ross Greenwood torches have been lit up by protesters.

They can be heard chanting in the background.

“There’s a lot of emails that we’ve seen in support… naturally you’ve got the protesters that are also sending in emails.

“I think it’s divided the city.

“Well I’ve got to tell you, everyone knows The Everest now, good or bad.” 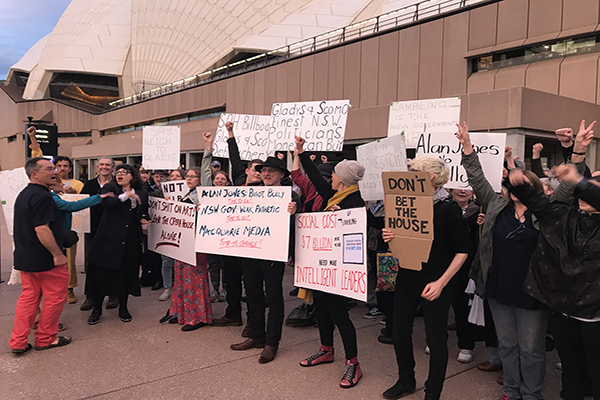 Protesters gathered outside the Opera House

But Mr V’Landys says there are various security risks surrounding the show at the Opera House as protesters have organised a demonstration to object to the show.