Mr Trump has long argued social media companies abuse liability accusing the companies of “blacklisting, banishing and cancelling”… which came to a head following his suspension from their platforms after his followers stormed the US Capitol.

Mr Kelly suffered a similar fate when his MP Facebook page, with more than 100,000 followers, was permanently shut down by the social media giant for falsely claiming he was spruiking COVID-19 misinformation. 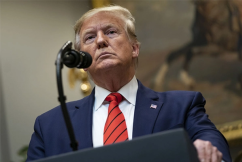