The region, explored and settled by colonists in the early days of Australia’s history, was officially declared “The District of Campbelltown and Airds” by Governor Lachlan Macquarie in 1820.

With names taken from his wife Elizabeth’s maiden name, “Campbell”, and her family estate in Scotland, “Airds”, the region became to a large extent the bread basket of early Sydney.

Development of the town was slow particularly after the departure of Macquarie, and it wasn’t until 1831 that residents took possession of town land. However, it was during this period that Campbelltown’s most famous incident occurred.

In 1826, local farmer Frederick Fisher disappeared. According to folklore, his ghost appeared sitting on a fence rail over a creek just south of the town and pointed to a site where his body was later found to be buried.

In memory of the incident, the Fisher’s Ghost festival is held each November in Campbelltown.   Campbelltown’s population increased steadily in the decades following. The southern rail line was extended to Campbelltown in 1858, leading to further development, and in 1882, Campbelltown Council was established allowing municipal works to occur in earnest. 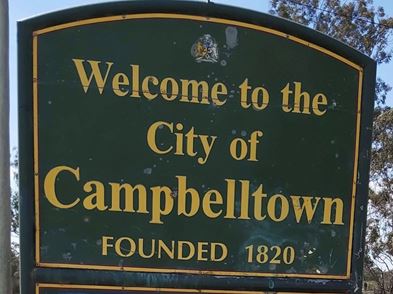