A gigantic weather system is dumping rain on the east coast of Australia, extinguishing bushfires and causing flash flooding.

The damaging coastal trough started in south-east Queensland and now stretches all the way down to Canberra and beyond. 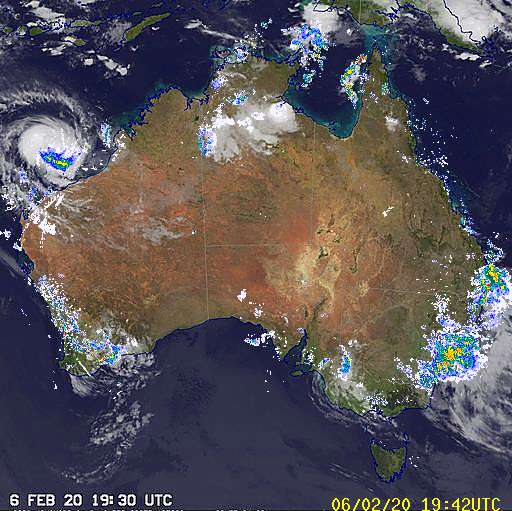 The far north coast of New South Wales has copped the brunt of it so far, with some areas receiving more than 250mm of rainfall in the past 24 hours.

The main street of Byron Bay now resembles a river with flash flooding warnings in place all across the northern rivers region.

Firefighters are “over the moon” as the rain extinguishes blazes that have been burning for months.

There are currently 42 bushfires burning across New South Wales, most on the south coast which is due to get heavy rainfall over the weekend and into next week.

Today we were over the moon to see rain arrive across many parts of New South Wales, with decent fall in the State’s north.

There are still 42 fires burning and 17 are yet to be contained. 1200 firefighters will continue working on these firegrounds tonight.#NSWRFS #NSWFires pic.twitter.com/xxNDkj97vV

NSW RFS Commissioner Shane Fitzsimmons tells Ray Hadley the rain over the next couple of days will go a long way to putting out fires.

“This rainfall is just great to see and it is certainly going to bring an easing to some of these fire conditions.

“All our firefighters who are farmers they keep saying to me, they’d rather be playing with mud than they are with dust.”

The coastal trough has delivered 85mm in Sydney’s CBD and more than 95mm on the Central Coast, bringing flash flooding and traffic chaos.

“We’re having much heavier rains than we thought.

“We’re doing a lot of planning in the metropolitan area and looking at what’s going to happen with the south coast, Illawarra area.”