Ray Hadley has called out the NSW RSL President over a reluctance to increase the capacity of the ANZAC Day march.

The defence community has questioned the limits placed on this year’s ANZAC Day march, with only 500 registered veterans allowed to participate.

Now, Ray Hadley has obtained a letter sent from NSW Health to Mr James about two weeks ago, encouraging the RSL to apply for a larger march. (See letter below)

“I don’t want to be critical of a returned serviceman … but I’m afraid I have no option.

A senior member of the Berejiklian government had also spoken to the RSL President, stressing they could have more people marching as long as they put forward a plan.

“I’ve had dialogue with NSW Health this morning, there’s been a distinct lack of interest by the RSL in pushing for a bigger march,” Ray revealed.

“I’ve had a gutful, Mr James. You need to pull your finger out, mate, and get this bloody well solved.” 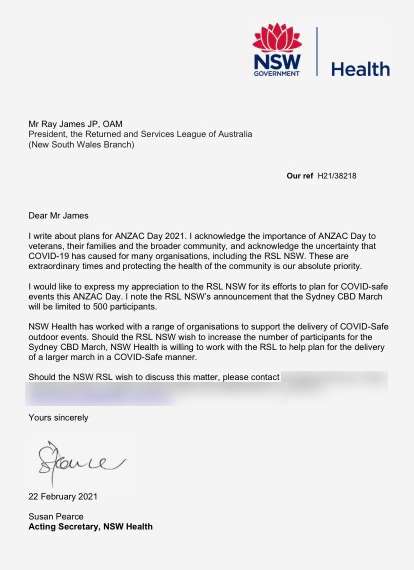