‘You’re going to have a battle with me’: Ray Hadley slams ‘insult’ to tradies 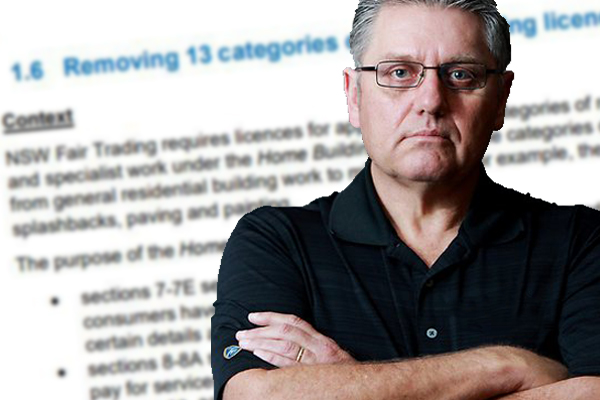 Ray Hadley has slammed a Department of Fair Trading proposal which could see unlicensed and unqualified tradies flood a range of industries.

Emailer Ben got in touch with Ray, expressing his concern about the state government’s plan to scrap licences for 13 trades including painting, decorating and paving.

The painter, who has been licenced for 10 years, says the changes will see any “Tom, Dick or Harry” with a paintbrush and a bucket get work they aren’t qualified to do.

But Ray isn’t having it for a second, warning this could lead to a new era of pink batts-style shonks, putting Australians in danger.

“I’ll tell you something Matt Kean. You’re going to have a battle with me and many others for your stupidity.”

Master Painters Australia NSW Association President Robin Ottowa is just as furious, telling Ray these plans are a “slap in the face” for all qualified tradies.

“It’s the wild west out there and this is just another nail in the coffin in the painting industry and overall trades.

“He (Matt Kean) has let the horse out of the stables and now he’s trying to say, ‘It’s too hard, you guys look after yourselves now’.”

Ray has vowed to take the matter all the way to the top, to stop elderly and vulnerable Australians from being ripped off by unlicensed frauds.

“Let me tell you, I will be talking to the Premier about this, this is a piece of insanity we can do without.

“If he wants to be the Minister for Fair Trading and Better Regulation, he’d better wake up to himself.”

Ben, who first brought the issue to Ray’s attention, says the Minister’s plans are “insulting”.

“I got my four-year apprenticeship, completed that. Applied for my licence (and) had to have my criminal history checked.

“This is a huge insult and a huge concern for the public in general.”

Qualified and licensed tradesmen flooded the open line after hearing the news, calling to share their anger and concern.

Painter Reece, who has just secured his licence after finishing a four-year apprenticeship, tells Ray he and his father are shattered by the news.

“He’s talking… about competition and he’s not the one out here doing all the work and seeing the amount of competition that’s already here.”

“This is simply a consultation paper. No decisions have been made.

“We want to hear everyone’s views on these propsoed reforms which is exactly why we’ve issued this paper so that all stakeholders, businesses, industry bodies have the opportunity to provide feedback.

“We appreciate there are strong views on this. We’ll be considering all submissions very carefully.”

Click PLAY below to hear the Minister’s statement in full

Fair Trading is accepting submissions on the proposal until August 27.

You can provide a submission by emailing: policy@finance.nsw.gov.au