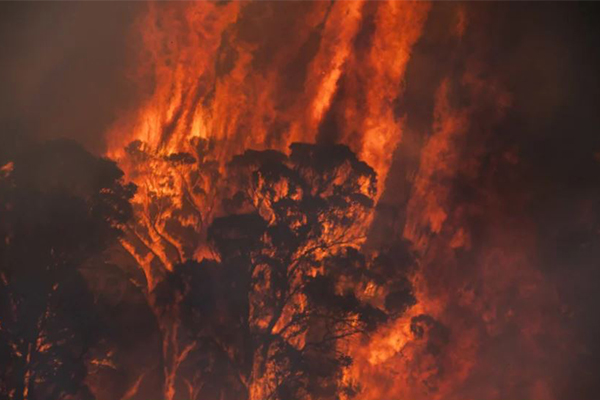 Eight dangerous fires burned between Nowra and the Victorian border on New Year’s Eve as the RFS warned they posed a serious threat to life.

The NSW Rural Fire Service has confirmed two people have died at Cobargo, and one elderly man is missing at Belowra.

My fam n I just ran for our lives through bush. Huge bushfire trapping the 5 of us in the holiday house we’re staying at. We don’t know what’s left but so grateful for the @NSWRFS 🙏 heading home to Sydney in shock. #tarbuckbay #NSWfires The #RFS are heroes!! pic.twitter.com/0ZudpxY7Ak

Residents were being urged to avoid bushland and move to larger towns or beaches if the path is clear.

The Princes Highway is closed on the South Coast, and motorists are being told to avoid non-essential travel. 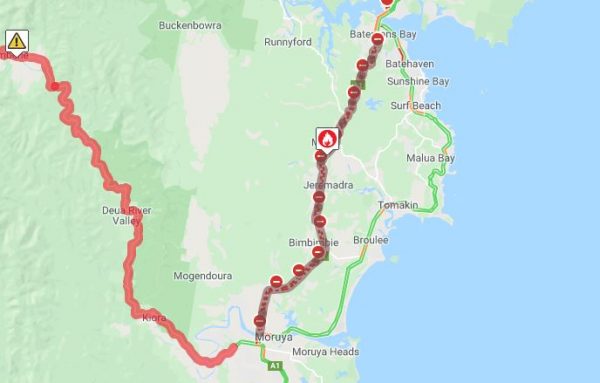 There were extreme fire conditions in the Illawarra/Shoalhaven, Southern Ranges and the ACT.

David Allen from Cobargo, southeast of NSW, tears up as he tells Natalie Peters and Erin Molan how he fought to save his pub.

“We live upstairs at the pub and we luckily saved it. The fire came around through the creek bed and we’re very, very lucky to save it. A lot of people have not been as lucky.

Jonathan Kearsley from 9 News is on the scene at Catalina, southeast of Batemans Bay.

He paints an extraordinary picture of the chaos for Mark Levy, telling him four homes have been destroyed.

“We were there as fire crews tried to save the house. They were still trying to get people out of homes and out of the smoke.

“It was extraordinary scenes, really, to watch. And then a house simply erupted before our eyes.”

“We’ve got to prepare ourselves, I think, for even more bad news as the authorities get out there and assess the damage.”

2GB Afternoons host Deb Knight is on holidays with her family at Tathra, on the south coast of NSW.

“There are fires pretty much surrounding these coastal towns, which as you know in 2018 went through the horrendous bushfires where 69 homes were destroyed.

“A lot of the locals here… are saying today feels and looks like that day. The memories that it’s bringing back for the people who went through those horrendous fires in 2018 are severe.”

Mayor of Cootamundra-Gundagai Council Abb McAllister tells Mark Levy he’s on holiday on the south coast with his family and been evacuated to Corrigans Cove at Batehaven.

“It’s a terrible day. There’s just smoke and fire all about. It really stirred up last night, and they’ve basically evacuated a lot of the places along the beach.

“My message to everyone… is to get to somewhere safe, get to a beach.

“Think of your life first and not your house.”