Ben Fordham has revealed the 2GB building is on a list of NSW properties that are wrapped in flammable cladding.

A number of NSW properties contain the dangerous, combustible cladding, which is similar to what was wrapped around the Grenfell Tower in London before a huge fire killed 72 people.

Although the NSW government is refusing to release the full list of properties which have the cladding, The Daily Telegraph has revealed those that are affected within the CBD.

Among those buildings is our very own building here at 2GB, Ben Fordham has revealed. 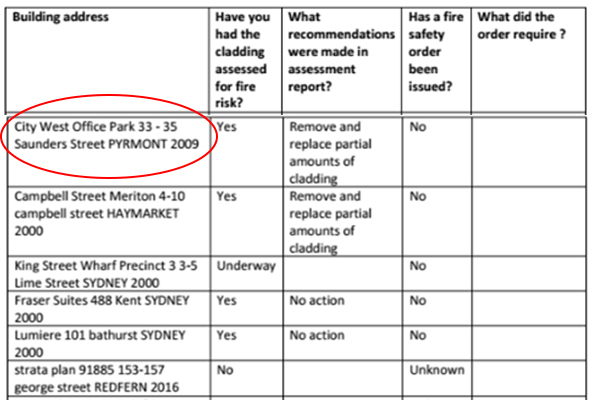 Building manager Goodman has confirmed five per cent of the panels are non-compliant and they haven’t told any tenants yet (full statement below).

The process to fix them is underway.

Click PLAY below to hear Ben reveal the full story

Minister for Better Regulation Kevin Anderson tells Ben Fordham the builders will have to pay to have the cladding removed themselves.

“We do not want to use taxpayers’ money to pay for someone else’s mistake. We’re saying that the owners of these buildings need to pursue other avenues to get it fixed.”

But he claims that releasing the list of affected buildings online was “reckless”.

Ben Fordham wasn’t having it, telling the minister people need to know if the building they’re living or working in could go up in flames.

Kevin Anderson: “The owners have been told, Ben, so punters and mums and dads…”

Ben Fordham: “But we haven’t! We’re a tenant in this building, we don’t know about it. I don’t know whose responsibility it is to tell us, but I’m glad the Daily Telegraph told us ‘cause no one else did.”

“We’ve been proactive in auditing and sending panels off for lab testing to find out what is and isn’t compliant.

We’ve found that approximately 5% of the panels at City West Office Park are non-compliant, that is, contains more than 30 % Polyethylene. This was self-reported to the cladding registration portal.

We have gone to tender for a contractor to replace the panels and then will be working with Council for approvals.

We will be communicating with customers once the timeline for the rectification works is confirmed.”