New South Wales has lifted the State of Origin shield despite losing Game Three to Queensland, 18-12 at Suncorp Stadium.

The so-called ‘dead rubber’ was anything but, with more than 51,000 fans witnessing one of the great Origin contests.

The Maroons got off to a fast start, drawing first blood with a Valentine Holmes intercept try.

The Blues had James Maloney sent to the sin bin but that just kicked them into gear.

Click PLAY below to hear the full highlights from Origin III

While reduced to 12 men NSW crossed twice through Tom Trbojevic and James Tedesco to head into half-time with a 12-8 lead.

The Maroons, desperate to avoid a series whitewash, bounced back though.

Holmes crossed for his second and the prodigal son, Daly Cherry-Evans, found the line to give Queensland an 18-12 victory in the series finale.

The win was a fitting farewell for legendary fullback Billy Slater, who is hanging up his representative boots.

The 35-year-old was named captain for his 31st and final game for his state and put in a Man of the Match performance.

He was also named the Wally Lewis Player of the Series, leaving many scratching their heads. 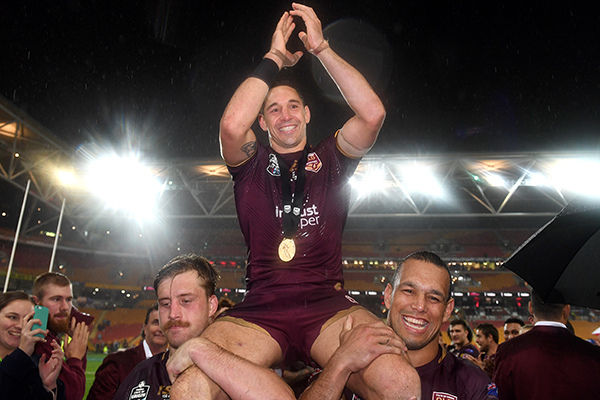 Billy Slater chaired from the field by Cameron Munster (left) and Will Chambers. AAP

Slater didn’t play in the series opener due to injury, was outstanding in a losing team in Game Two and again brilliant in Game Three.

With Mal Meninga, Darren Lockyer and Laurie Daly on the voting panel, many believe the medal was a gift for the outgoing star and should have been awarded to a Blues player.

Regardless, nobody can deny the legacy he leaves on the Origin arena.

Queensland claimed bragging rights on their home turf, but it’s Boyd Cordner and his men who partied long into the night.

Those celebrations will continue today with a public reception at The Star in Sydney.