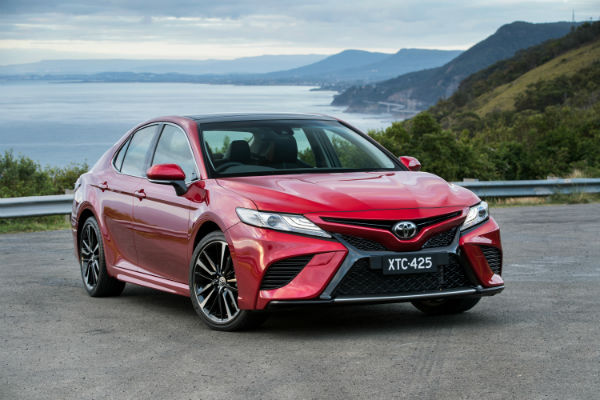 We’ve lived with the Toyota Camry nameplate since 1983 – the first model fully imported which gave it a very strong reputation for reliability and serviceability.
However since 1987 the Camry has been locally produced and for 23 of those years it’s been our biggest selling mid-sized car – bland yes and to some whitegoods on wheels but the reputation of the model with owners is high – in short, low cost trouble free motoring. So with Toyota’s local manufacturing finishing last month it showed off its new fully imported 8th . Generation Camry this week – built in Japan it arrives in 9 variants with three marginally dearer and six more affordable to the outgoing car. The entry Altise nameplate dropped in favour of the Ascent, the range now kicking off $1,200 dearer at $27,690 but keep in mind that Toyota has had aggressive run-out drive-away pricing on the local car for some time. Three engines 2.5-litre four, 2.5-litre petrol/electric hybrid and 3.5-litre V6. The V6 effectively replacing the discontinued Aurion model. So the new imported Camry has answered a few criticisms of old – now with more aggressive styling and with a new-found on-road dynamism as the company seeks a bigger share of the private market to that achieved with the local model. As I said, nine models in total – the four cylinder in Ascent, Ascent Sport, SX and SL and in hybrid, Ascent and Ascent Sport featuring six-speed auto, the 12 percent more-powerful V6 with a new direct-shift 8-speed automatic. I’m David Berthon