Dr Brendan Nelson AO, Former Director of the Australian War Memorial (former Liberal member for Bradfield & minister in the Howard Government – former Australian Ambassador to Belgium, the European Union & NATO (2010–12), regarding the signing of the ANZUS Treaty 70 years ago.

The Australia, New Zealand, United States Security Treaty (ANZUS or ANZUS Treaty) is the 1951 collective security non-binding agreement between Australia and New Zealand and, separately, Australia and the United States, to co-operate on military matters in the Pacific Ocean region, although today the treaty is taken to relate to conflicts worldwide.

In the years following the Second World War, Australia and New Zealand began pressing the United States for a formal security guarantee. The two nations felt threatened by the possibility of a resurgent Japan and the spread of communism to their North.

Additionally, the fall of Singapore in 1942 had demonstrated that their traditional protector, the United Kingdom, no longer had power in the region. This added to their sense of vulnerability.

The United States was initially reluctant, offering instead an informal guarantee of protection. But the need to strengthen the West against communism grew with the Communist victory in the Chinese Civil War in 1949 and the 1950-1953 Korean War.

The three nations also pledged to maintain and develop individual and collective capabilities to resist attack. 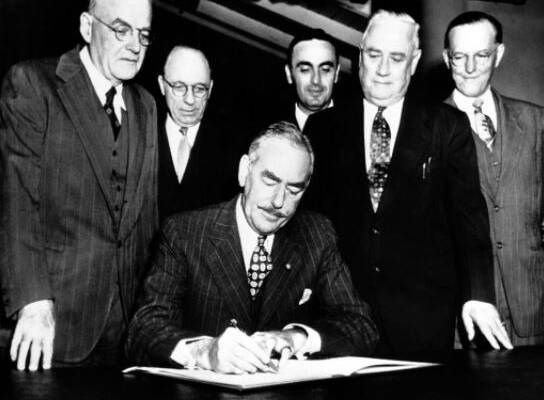