All lanes of the M4 motorway have now reopened following a major incident earlier this morning.

Just before 6am, ten cars and a truck were involved in the crash at Mays Hill, before the Church Street off-ramp. 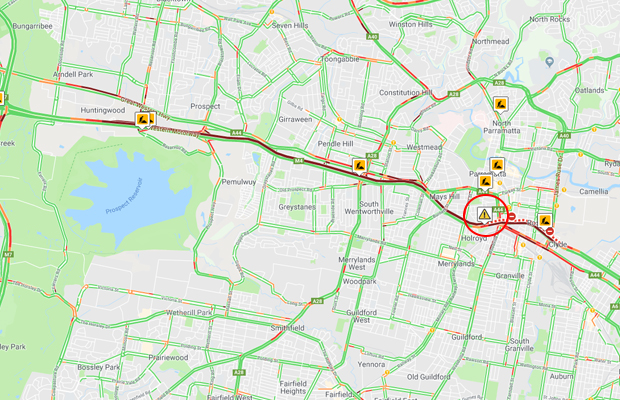 An army of emergency services were called to the scene, with police confirming one man had been killed and nine injured.

The 36-year-old tradie was killed when his ute became lodged under a truck.

“The first involved three vehicles, including the ute and the truck, and then there was a secondary crash with multiple vehicles.”

Citybound traffic was queued at least 15 kilometres, back to the M7, for much of the morning.

“The accident was actually spread out over approximately 200 metres.”

The Transport Management Centre’s Dave Wright is urged motorists to “avoid the M4 at all costs!”

“Catch the train. It’s going to be there for quite some hours,” he told Alan Jones.

MAYS HILL: All eastbound lanes on the M4 approaching Church St are now closed due to a serious truck & 4-car crash. 1 of 4 westbound lanes also remains closed. Eastbound traffic’s being diverted off the M4 at Cumberland Hwy.

And that’s exactly what happened.

Emergency services, investigators and then safety officials all took their turn pouring over the scene.

All lanes were eventually reopened at about 11.30am, almost six hours after the crash.