Facebook has announced publishers and people in Australia will be restricted from sharing or viewing news content.

It comes as the social media giant failed to reach an agreement with the government over Australia’s proposed media bargaining laws.

“It has left us facing a stark choice: attempt to comply with a law that ignores the realities of this relationship, or stop allowing news content on our services in Australia. With a heavy heart, we are choosing the latter,” Facebook’s Australia and New Zealand managing director William Easton said in a statement.

“Unfortunately, this means people and news organisations in Australia are now restricted from posting news links and sharing or viewing Australian and international news content on Facebook.”

“There are already questions about the credibility of information and sources on the Facebook platform.

“They’re basically saying to Australians: ‘If you’re looking for reliable news, Facebook is not the place to look for it.’

“It’s certainly something that raises concern… the government will consider this very carefully.” 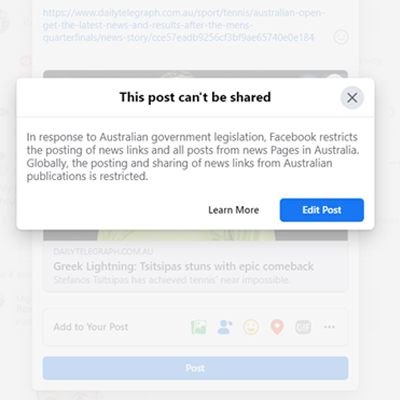