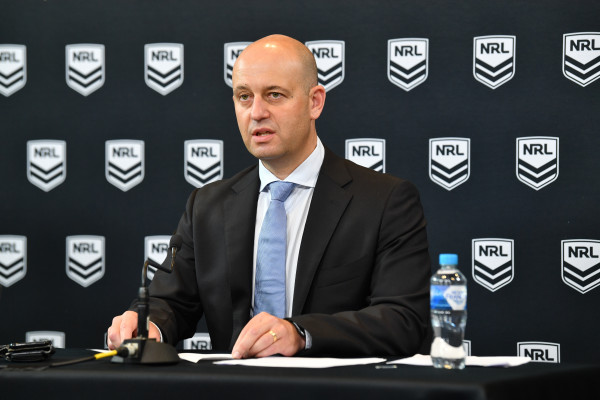 The NRL has announced a slew of sanctions against players and clubs in an unprecedented media conference.

Following Thursday’s announcement of a new ‘no-fault stand-down’ policy, CEO Todd Greenberg has handed out punishments for a range of issues that took place over Summer.

As revealed by Ray Hadley, Manly Sea Eagles player Dylan Walker will be stood down until May.

The former NSW Blues and Kangaroos player was arrested on December 6 and has been charged with assaulting his fiancee.

The 24-year-old woman allegedly suffered minor cuts to her shoulder, leg and feet but has since recanted her claims and is supporting Walker.

Prosecutors are persisting with the case and Walker, 24, will be banned from playing until his next court appearance on May 10.

Dylan Napa has been fined 10 per cent of his 2019 salary following the publication of several lewd videos.

Todd Greenburg tells Ben Fordham the Bulldogs recruit wasn’t suspended because the videos were taken five years ago and were leaked without his knowledge.

“If there was a grading for stupidity it would be on the highest level.”

Listen below for the full interview

North Queensland Cowboys veteran Scott Bolton has been suspended for 10 weeks and fined five per cent of his 2019 salary after pleading guilty to common assault.

The 31-year-old grabbed a woman’s thigh while out drinking with teammates at a Bondi Beach bar last year.

It’s been confirmed former Cronulla Sharks coach Shane Flanagan has had his registration cancelled for breaching an ASADA ban in 2014.

The NRL will consider any future request to come back to the game on its merits but he will not return in the short term.

The proposed fine of $800,000 on the club has been reduced to $500,000 after the club acknowledged and accepted its wrongdoing.

The Integrity Unit has uncovered breaches of the salary cap rules over a number of years dating back to 2013 but not affecting their 2016 Premiership year.

A $707,000 penalty has also been imposed on the club’s salary cap over the next two season’s, meaning the club faces total fines of $1.25m from today’s announcements.

The $750,000 fine issued to the Wests Tigers over an undisclosed ambassador agreement with Robbie Farah has been halved.

Club CEO Justin Pascoe has also apologised for his failure to comply with the rules and will be suspended for six months, backdated to December 19.

A request by the Wests Tigers to register Zane Musgrove, who is currently facing indecent assault charges, has been refused until the case is concluded.

NRL Chief Executive Todd Greenberg speaks to Ben Fordham about the validity of the changes.

‘The game is much bigger than any individual’: NRL boss Todd Greenberg stands by Jack de Belin ruling