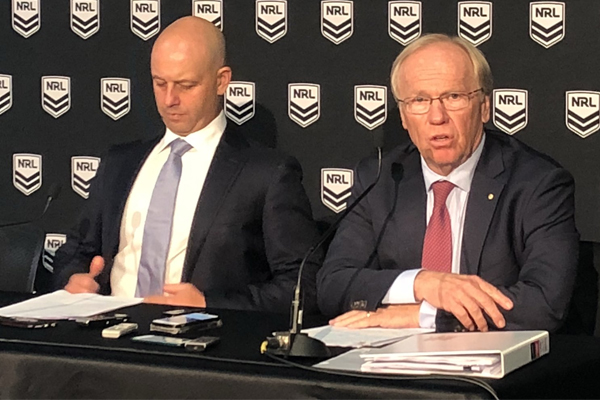 The NRL has stood down star player Jack de Belin under a new policy designed to protect the reputation of the game.

The Australian Rugby League Commission (ARLC) met in Sydney on Thursday to finalise its behavioural policy.

Under the new rules, any player facing serious criminal charges will face a no-fault stand-down until the finalisation of court proceedings.

BREAKING: ARL commission announces “no fault” stand down for players charged with a crime with max penalty of 11yrs and up – will still be paid and train with team. Clubs can apply for salary cap relief. Rule begins at the start of the season @2GB873 pic.twitter.com/tV3wkcy11g

“Whatever decision we made today would have been controversial,” Beattie said.

“This is not about being popular, this is about doing the right thing by rugby league. This is also about sending a clear message that the game doesn’t tolerate violence.”

Serious criminal charges have been specified to include any offence that carries a maximum jail term of 11 years or more.

The NRL Chief Executive also has the discretion to stand down players facing charges of violence in relation to women and children.

Player welfare measurements have been included in the policy, mandating that players will be stood-down on full pay and will be allowed to keep training with their club.

Clubs will be allowed to apply for salary cap relief but it will be dealt with on a case by case basis.

St George-Illawarra and Origin star Jack de Belin is the first player to be stood down under the controversial policy.

The 27-year-old has pleaded not guilty to aggravated sexual assault and could miss the entire 2019 season as court proceedings continue.

It’s believed clubs and the Players’ Union may launch legal action to oppose the policy.

Lawyer Sam Macedone tells Ben Fordham the NRL “will not get any sort of consistency.”

“I think they opened up a very big can of worms and it’s going to create more problems than good.

“There are damages galore that can be claimed, this is a mess… Honestly, it’s a lawyers dream!”

Full statement from the ARLC

The change was outlined to NRL Chairs and CEOs, following the ARLC’s Annual General Meeting.

“The change has occurred after extensive consultation across the community and amongst stakeholders,” ARLC Chairman Peter Beattie said.

“As Chairman, my responsibility, and the responsibility of my fellow Commissioners, is to act in the best interests of the entire game – and to take a leadership position when it comes to acts of violence against women in particular.

“What we have heard are community concerns about players facing serious criminal charges representing the Game on the field, and today the ARLC has acted on those concerns.

“The policy addresses charges which are of particular concern to the Game and the broader community, including sexual violence and violence against women.

“That includes the present game – and the future game.

“It also includes protecting and supporting the wellbeing of those entrusted to us as part of our game.  That includes players and their families; clubs; sponsors; and fans.

“Today, the Commission has acted with those interests top of mind.  And we are supported by Todd and his leadership team; along with Club Chairs and CEOs.”

‘Take away the thing they love’, says NRL’s gender advisor