The ABC has issued an embarrassing apology over their reporting of a sloppy investigation into allegations of war crimes.

An ABC report alleged soldiers from the November Platoon murdered a prisoner, but the unidentified US Marine making the claim was not a witness but rather heard ‘a pop on the radio’ he assumed was a gunshot.

The story has since been subject to major media scrutiny, with Ben Fordham calling on the ABC to apologise.

The email, sent yesterday from the public broadcaster, said, “ABC News apologises for this error” that breached their own standards.

“In light of the conclusions of Audience and Consumer Affairs’ investigation into your complaint about the 21 October 2020 ABC News story, ‘US marine says Australian special forces soldiers made ‘deliberate decision to break the rules of war’’, we have reviewed our findings in relation to your complaint about a story published on 19 November 2021, ‘Defence confirms criminal investigation into conduct of Australian commando platoon in Afghanistan’ and concluded that an aspect of that complaint is upheld.

Consistent with the findings in relation to the October 2020 story, Audience and Consumer Affairs find that reasonable efforts were not made to ensure that the US marine’s allegation was correctly reported in the November 2021 story. This was in breach of standard 2.1 and that aspect of the complaint is upheld.

ABC News apologise for this error and explain that it arose in the production phase for the story. The story has been corrected. Further, the clarification which has been added to the 2020 story will help to ensure that any future developments in this story are reported with accuracy.”

However, the ABC investigation claimed, “The US Marine did not claim that the Commandos were from November Platoon. Nor did the ABC story state or imply this.”

But Ben Fordham points out an article posted on the ABC website last year did exactly that.

The below correction now appears on the ABC story.

“A key point for this story initially stated that a US Marines helicopter crew chief alleged that November platoon killed an Afghan prisoner after being told he would not fit on an aircraft. It was amended on March 11, 2022 to reflect that the marine’s allegation did not identify a particular platoon.”

And on the initial story from October 2020:

The US Marine Corps helicopter crew chief did not claim that the commandos he alleged killed a prisoner were from November Platoon and nor did the ABC’s story. 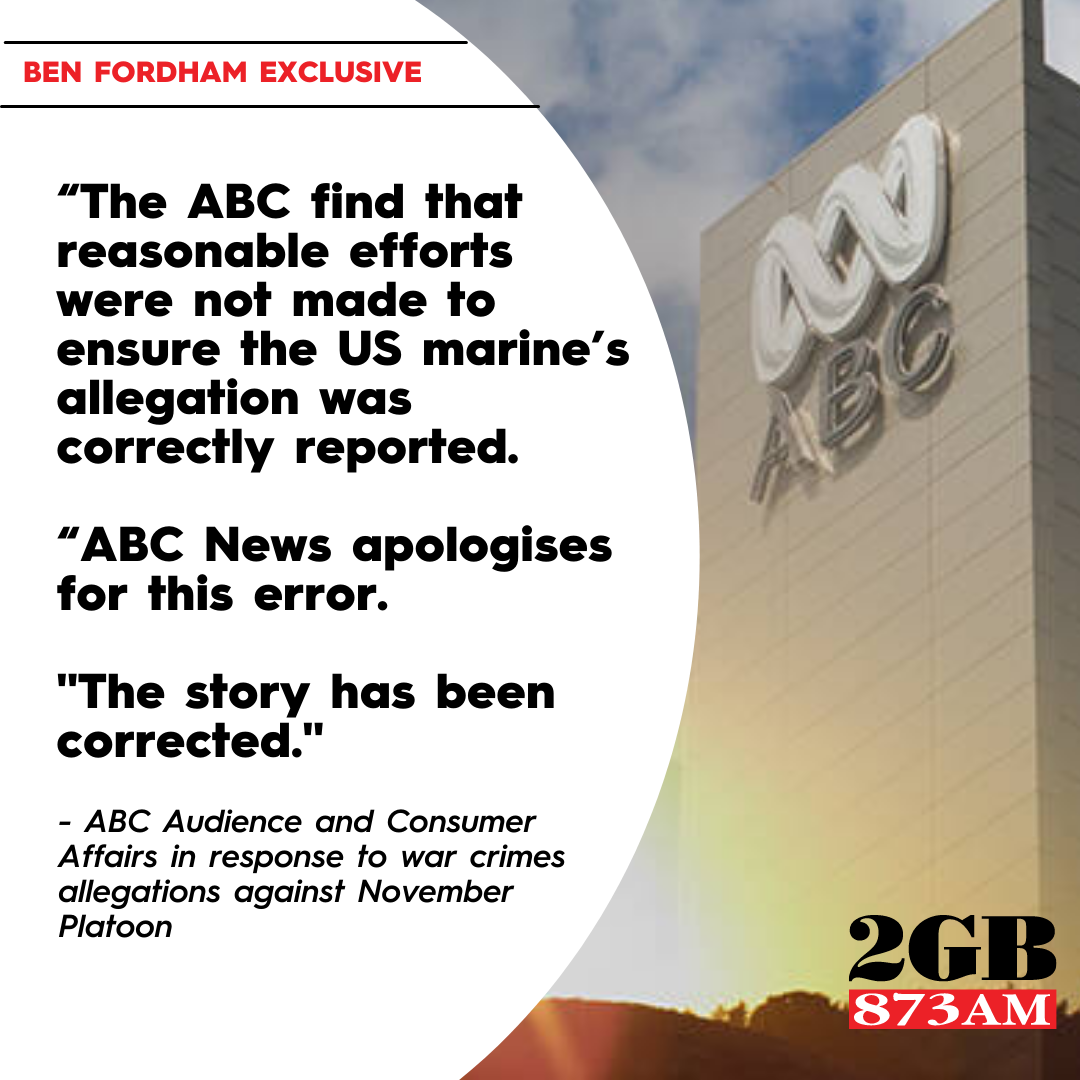