Champion mare Winx in top form ahead of milestone race 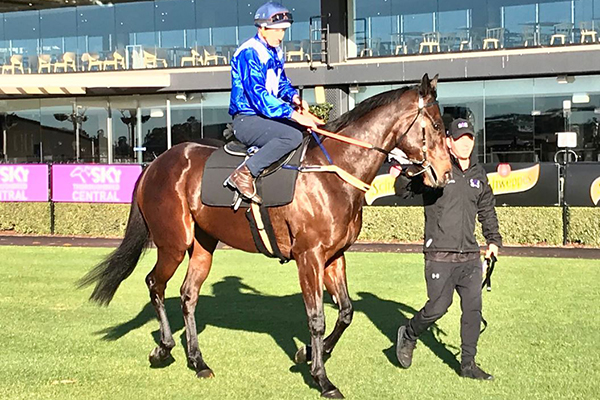 Champion mare Winx has shown top form in her final barrier trial at Rosehill, with trainer Chris Waller describing the run as a “good pointer in the right direction”.

On Saturday week, the sprinter will aim to break Black Caviar’s record of 25 consecutive wins when she returns to racing in the Group One Winx Stakes at Randwick.

She was in a “star-studded heat” this morning, coming out last before working her way through the field and finishing strongly in third behind Alizee and Ace High.

TRIAL REPLAY: WINX was very strong through the line in her trial this morning at @rosehillgardens – @atc_races // Vision courtesy of @skyracingau pic.twitter.com/JGtGaT9929

Jockey Hugh Bowman has described the trial as her best pre-race hit out ever, with trainer Chris Waller telling Ray Hadley it was “smiles all-round” this morning.

“The best way of explaining Winx is she’s a horse that performs under immense pressure,” he says.

Chris tells Ray the seven-year-old mare is still striving at the highest level but they’re aware the breeding season is looming.

“We’re always looking for the signs to say that she wants to be a mum.

“We’re looking just as much towards that part of life as we are for the next few runs.”

Click PLAY below to hear Chris Waller’s interview with Ray

News Corp Racing Editor Ray Thomas tells Alan Jones Winx was beaten in the trial by about a length but was “never in clear galloping room”.

“In the words of Hugh Bowman and Chris Waller, they believe that’s the best she’s ever gone in a barrier trial.”

Click PLAY below to hear the full interview with Ray Thomas

Serious doubts have been raised about the racing future of veteran sprinter Chautauqua after he once again failed to jump from the gate at today’s barrier trial at Rosehill.

Although he eventually came out of his gate under jockey Tommy Berry’s urgings and went around the track, he was more than 90 lengths from the field.

Chautauqua fails to jump AGAIN. That could be it for the veteran.@2GB873 @MacquarieSport