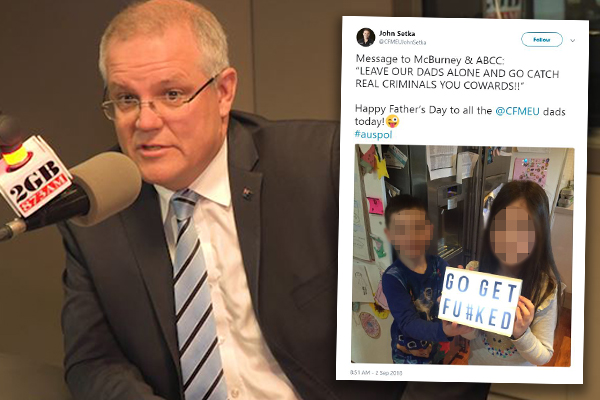 The Prime Minister is considering deregistering the CFMEU after an official used his children in a social media campaign against the building industry watchdog.

Victorian secretary John Setka tweeted a photo of his children holding a sign which directed an expletive at the Australian Building and Construction Commission (ABCC).

The caption reads: “Leave our dads alone and go catch the real criminals you cowards” 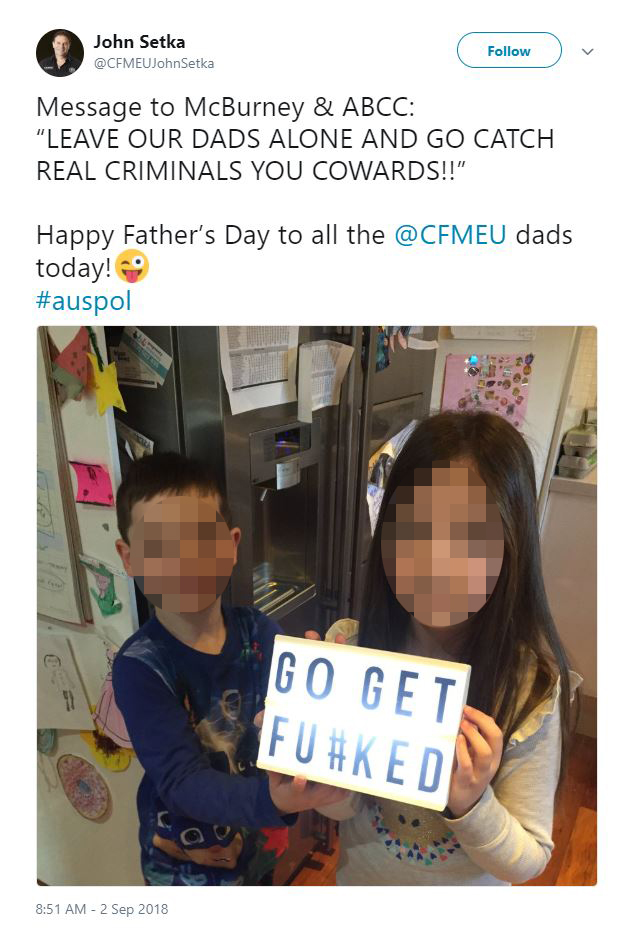 Scott Morrison tells Alan Jones he would “of course” consider deregistering the CFMEU and the move by Mr Setka to involve his children is “one of the ugliest things” he’s seen.

“The CFMEU has behaved, under John Setka, like a bunch of thugs.

“I mean, this stuff just makes your skin crawl.”

Mr Morrison says he can’t understand why the Labor Party didn’t distance itself from Mr Setka.

“If Bill Shorten’s fair dinkum about anything, then he must cease all ties between the Labor Party and himself and John Setka and the CFMEU out of decency, let alone anything else.

“I mean Bill Shorten is union bred, union fed and union-led, and that’s how he will run Australia.”

The PM also tells Alan he’s “not convinced” walking away from the Paris climate agreement will bring down power prices.

The federal government’s key objective is to get electricity prices down and the PM has split the energy and environment portfolios so power prices don’t get conflated with emission reduction targets.

“Angus Taylor has one job; get electricity prices down. He’s not there to pursue anything else,” he tells says.

The PM has signalled the government is unlikely to walk away from the Paris deal, saying leaving the international accord won’t make a difference to people’s power prices.

“Well, I’m not convinced changing it makes any difference one way or another Alan, that’s the bottom line.

“That discussion isn’t going to change anyone’s electricity prices and that’s what I’m focused on.

“I’m not climate warrior… what I’m about is getting people’s electricity prices down.”

In studio with Alan Jones