‘That’s not how it was done’: PM won’t back down on controversial $444-million barrier reef grant 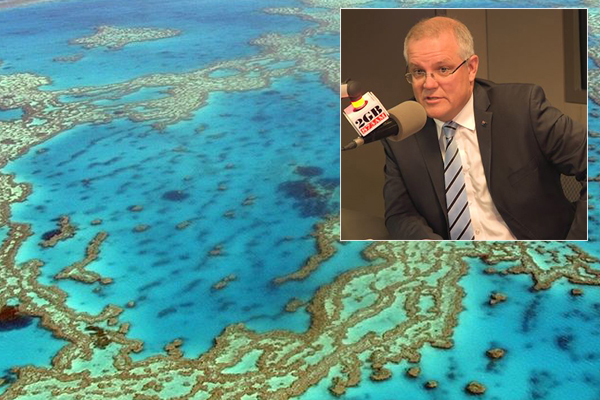 Next Monday Parliament meets for the first time since Scott Morrison became Prime Minister, and there’s a lot of issues to put on the agenda.

When pressed on the controversial half a billion dollar handout to Great Barrier Reef Foundation, Mr Morrison vehemently defended the government’s decision telling Ben Fordham “they chose to invest in the great barrier reef and not do it through a committee of bureaucrats”.

Ben describes the odd decision to give the money away without any tender process as “one of the most dubious, controversial and unpopular decisions in recent times”.

Mr Morrison opposed the accusation saying “that’s not how it was done… you misunderstand the process” and suggested the initiative was the best way to ensure the money would be invested into the reef without political interference.

The Prime Minister has told Ben they won’t be reversing the decision because they “chose to actually put the investment into an organisation that has a very good reputation”.

Mr Morrison confirmed to Ben that the Great Barrier Reef Foundation will hold onto the $444 million and farm it out to other organisations.

“I believe that organisation has the ability to invest this money wisely into the future of the great barrier reef.

“I don’t think the public service has all the answers to all the questions, I don’t think your listeners do either.”

On the issue of Australia’s commitment to the Paris targets, the Prime Minister says we’ll meet them at a “canter” and it won’t force prices any higher.

“We met the Kyoto targets and we smashed them. We’re going to meet the next one at a canter.

“That means it’s not going to have any impact on electricity prices one way or another.”

Mr Morrison says renewable energy targets were forcing power prices up and they’ve now been scrapped as the new Energy Minister gets to work.

“We shouldn’t get distracted by ideological debates,” he says.

When it came to the issue of water security for our farmers, Mr Morrison avoided answering direct questions around a long-term water transport network for farmers instead telling Ben “drought is a fact of life in Australia” and that “water infrastructure is a big part of the plan”.

“We’ve had the CSIRO come back just this week and give us a major report on where dams should be… so that work is already underway.”