Thousands of students are expected to ditch school and join climate change protests across the country today.

Almost 12,000 people have registered their interest in a Facebook invite for the Sydney and Brisbane marches, which are expected to cause traffic chaos.

“Australia is in the thick of the climate crisis,” the invite says.

It’s claimed the protests are led by students but in a professional media release, SchoolStrike4ClimateChange says “students have this year extended an open invitation to everyone, including the union movement, health groups and the faith community”.

The Australian reports marches are actually being run by the Australian Youth Climate Coalition, an activist organisation that is registered as a charity with 68 adult staff.

SYDNEY CBD: Some roads are planned to close btwn 1pm and 3pm for a march from Town Hall to Hyde Park via Park St. Avoid the area. https://t.co/NKmAToCRoo

City of Sydney Council voted to stand in solidarity with students taking part in the strikes and also approved a $20,000 donation to the activist group secretly organising the rallies.

“There’s no doubt about the fact that this is purely and simply a political activist group.

“And frankly, ratepayers shouldn’t be asked to give their money to political parties and politically motivated groups.”

14-year-old Ambrose Hayes is one of the many children who will take to the streets today.

He phoned Steve Price to debate climate change and deliver the three demands of the student protesters. 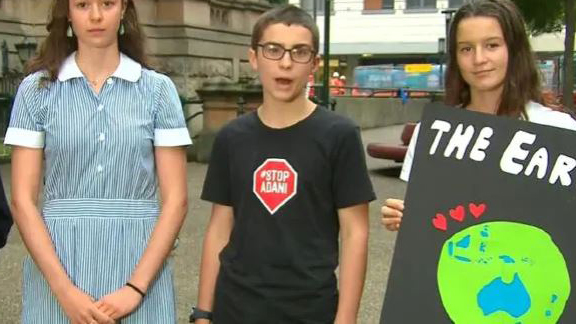 Steve quizzed Ambrose on some of the finer points of his climate change beliefs.

Principal Jason
“I don’t know of any of my students, if they’re going today. I would certainly hope not.

“I couldn’t physically stop them but I don’t think, given the culture of my school, I don’t think they’d do that.”

Principal Mark
“Why wouldn’t every truancy officer in the state be down at that protest checking these kids out?”

Liberal MP Craig Kelly says he is astounded by the protesting students’ lack of knowledge on climate issues.

“They’re not even getting half the story,” he tells Chris Smith.

“What I’ve found when I speak to some of these kids is their knowledge in this area is just so shallow.

“They’d be lucky to know about five per cent of the area that they’re talking about.”