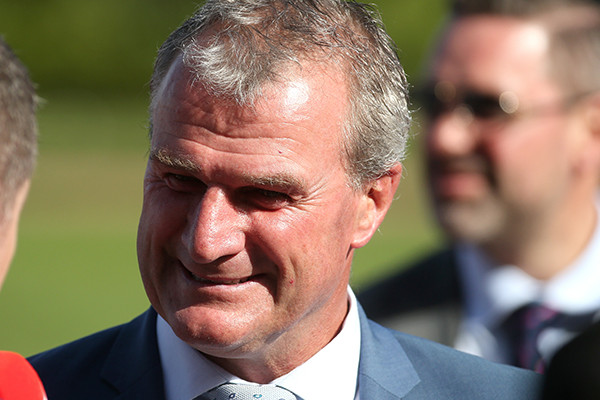 Six properties at Ballarat and Warrnambool were raided and police uncovered four taser-like devices, known as jiggers, an unlicensed firearm and a substance believed to be cocaine.

48-year-old Weir, a 38-year-old Yangery man and a 26-year-old man from Warrnambool were arrested in the raid, but have since been released.

Darren Weir Racing has released a statement to clients and owners saying despite the investigation, it is business as usual.

The stable says it is aiming to ensure owners are not disadvantaged by the process and has vowed to make a more detailed announcement as soon as possible.

“This will rock the racing world… I’m almost speechless.”

The three men are believed to have been questioned by police on matters relating to multiple charges including animal cruelty and sporting integrity:

Herald Sun sports reporter Leo Schlink tells Alan Jones Weir is the best trainer in Australia, if not the world.

“There is no other trainer in the world who trains as many winners as Darren Weir.”

A one-time small-time trainer in rural Victoria, his rise has been meteoric in the past five years, including the Melbourne Cup victor of Prince Of Penzance in 2015.

Schlink says the investigation “has been several months in the making” and warns there could be more shocking revelations to come.

“There have been rumours floating around for at least 10 weeks about a video that has not yet come into view.”

Alan believes “this will rock the racing world”.

“Racing Victoria’s Integrity Services team has been conducting an investigation into the activities of licensed persons in the Warrnambool and Ballarat areas. During the course of our investigation we sought the support of Victoria Police’s Sporting Integrity Intelligence Unit on the matter, instigating their investigation.

“The Sporting Integrity Intelligence Unit this morning executed warrants at properties in Warrnambool and Ballarat where they arrested three licensed persons for questioning. Members of the Racing Victoria Integrity Services team attended licensed stables to assist Victoria Police and to investigate potential offences against the Rules of Racing.

“As the matters are the subject of on-going investigations by Victoria Police and Racing Victoria we are not at liberty at this time to disclose the identities of the persons arrested nor the details of the investigations.

“Racing Victoria is committed to maintaining the highest integrity standards in our sport and, where appropriate, we will continue to work with Victoria Police on those investigations.”