Penrith Panthers star Tyrone May has been arrested and charged over leaked sex tapes.

The videos have been leaked online in recent days with May telling Channel Nine’s Danny Weidler he is the victim of an extortion attempt.

But police have now confirmed the 22-year-old has been charged over filming two women without their knowledge and sharing the videos without their consent.

He allegedly filmed one of the videos in Coffs Harbour in February, while the other one was allegedly recorded at Kingswood in May.

Police have been told that while the sexual acts were consensual, the women were unaware they were being filmed.

Over the past few days, the women became aware of the existence of the videos and contacted police.

The Panthers released a statement on Monday, confirming the club is aware of the videos. 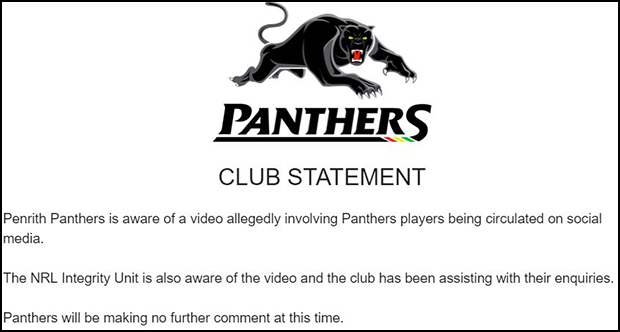 At 9am on Tuesday, Tyrone May handed himself in at Penrith Police Station.

May has been granted conditional bail and will face court on May 1.

Tyrone May will not be allowed to play until court proceedings have concluded.

The NRL said today that Penrith player Tyrone May will be subject to the new no-fault stand down policy.

Police today charged May with two separate counts of recording and distributing intimate images without consent.

CEO Todd Greenberg said the NRL was making no judgement on his guilt or innocence.

“That is a matter for the courts,” he said.

“Our new policy provides for the automatic stand down of players on a no-fault basis where they are charged with serious criminal matters.

“It also provides discretion for players to be stood down for other matters, particularly where the criminal allegations involve women.

“In the circumstances of the current charges I have determined to place Tyrone May on a no-fault stand down.

“The no-fault stand down will remain in force until the court proceedings are concluded.”