Two people are dead and two others have been injured in what police are treating as a “terrorist incident” on Melbourne’s Bourke Street.

It started with a car bursting into flames near the entrance to the mall about 4.30pm on Friday.

The car was packed with what police described as “BBQ style” gas bottles.

A man wielding a knife, Hassan Khalif Shire Ali, then stabbed three people – one fatally – before lashing out at police.

Vision from the scene shows a man lunging at police officers with a knife.

After several lunging attempts to stab patient police officers, Shire Ali was shot by an officer.

He was arrested and taken to hospital in a critical conditions but later died in hospital. 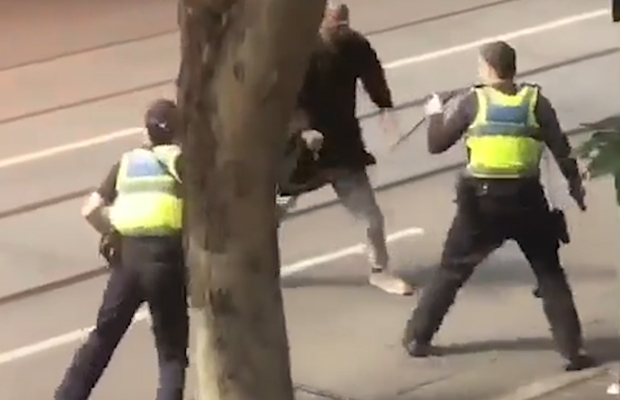 Shire Ali, 30, was known to police, and they believe he had intended for there to be a larger explosion in Bourke Street.

He lived in Melbourne’s north-west, having moved to Australia from Somalia in the 1990s.

Police have spoken his wife since the attack.

“Police were still in the car and the attacker came out to attack the police.

“He was fighting against the police, police tried to subdue him.”

He says the police did a “good job” in responding.