The cousin of Israel Folau has been let go from his job at a Catholic school after he publicly expressed his religious beliefs.

Until recently, 20-year-old Josiah Folau had been working as a boarding supervisor at his former school, St Gregory’s College in Campbelltown.

But Ben Fordham has revealed he has recently been let go, with one of the factors relating to how he expressed his beliefs.

On the 18h of July, Josiah posted the following photo to Instagram. 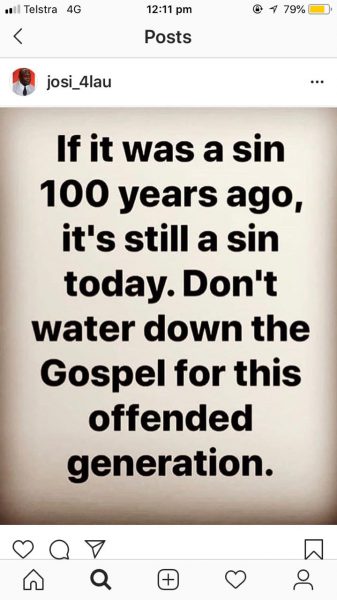 And on the 20th of July, Kate McClymont published two articles in The Sydney Morning Herald, where Josiah was quoted as saying “the Catholic Church is a synagogue of Satan”.

He has since been let go from his employment at the Catholic school.

When the school was contacted for comment, Headmaster Lee MacMaster said:

“We have met with Josiah recently and in our discussions, Josiah has made the decision to discontinue his casual employment at St Gregory’s College. We respect Josiah’s privacy in this matter.”

He says his cousin’s recent comments are “crazy”.

“It’s a ridiculous thing to say. The Catholic Church does amazing work.”