Steve Smith has responded to Deb after she took to Twitter to describe the heartbreak her son felt watching Smith’s press conference Thursday evening.

Deb encouraged her 9-year-old son Darcy, an avid fan of Smith’s, to write a letter of support and compassion to the fallen star.

But the encouragement was met with hateful comments from online trolls, attacking Deb for encouraging her son to look up to a “cheat”.

Just spent 20 minutes consoling my crying 9 year old who is a major Steve Smith fan after he watched the press conference. Encouraging him and all kids to write Steve a letter telling him how much you love and admire him.

Since her Tweet went viral, Steve Smith has contacted Deb directly, asking her “could you please apologise personally to your son for me”.

“I’m sorry that I made him upset also,” he writes.

“Steve, you’ve given me goosebumps. I know you’re at rock bottom,” Deb says.

See the messages below 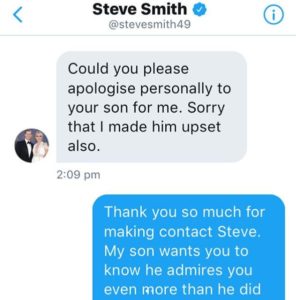 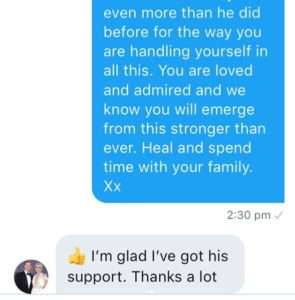 To those attacking her on social media for her decision, she says, “I don’t agree with that, they (the cricketers) have admitted they have made an appalling mistake”.

Kids who wish to send a supportive email to their cricketing heroes can do so via aca@auscricket.com.au