The City of Sydney will retire their mayoral chains after discovering they carry a ‘racist’ coat of arms.

Deputy Mayor Linda Scott declared at a council meeting last night she no longer wanted to wear the chains as the symbol made her uncomfortable.

The chains bear the council’s original coat of arms, designed in 1857, which depict a meeting between a colonial and an Aboriginal with the words “I take but I surrender”. 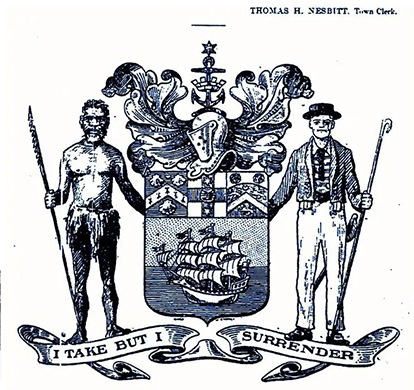 The coat of arms in question

Clover Moore tabled an urgent motion to have her own chains retired after she discovered they carry a smaller version of the symbol.

The controversial coat of arms is also featured on the Town Hall facade and windows, but the council has no plans to remove them.

“Really? What a mess. Who’s voting for these people?

“I would’ve thought that’d be a fairly embarrassing thing to admit. That something that you personally find so offensive you’ve allowed to be worn on your body for 15 years.”