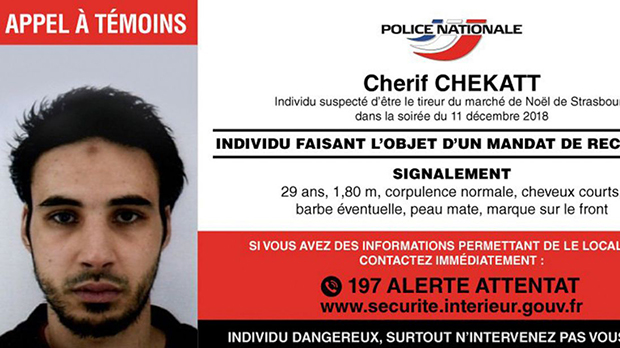 More than 700 officers have been hunting Chekatt after the 29-year-old escaped following a gunfight with police in the hours after the attack.

At least three people have been killed and more than a dozen wounded in a shooting at a Christmas market in France.

The gunman opened fire at Place Kleber in Strasbourg, near the German border, and is still on the run.

The city is famed for its annual Christmas market, calling itself “Le Capitale de Noel” or The Christmas Capital.

One shopkeeper told local media “It lasted about 10 minutes. There were gunshots and people running everywhere.”

Police have now confirmed at least three people are dead and 13 others have been critically wounded.

The gunman was born in Strasbourg but was on a terror watch list, with officers actually raiding his home earlier in the day.

He wasn’t home but officers reportedly found grenades and other explosive material.

Police did encounter the man after the attack, wounding him in a gunfight.

He remains on the run though.