A group of animal rights protesters have allegedly injured and killed several hens in an illegal break-in at a chicken farm south-west of Sydney.

Just before midday, a large group of protesters allegedly forced entry into a farm shed on Mowbray Road at Lakesland, near Camden, and threatened the owner with bolt cutters.

As the group burst into the shed the commotion scared the animals who crushed each other, with several suffocating.

The group ignored directions from RSPCA inspectors, who were inspecting the property at the time, and tried to put the chickens in cages before attempting leaving.

Police arrived as the protesters were attempting to flee and stopped a Toyota Hilux full of chicken cages nearby.

NSW Hen Rescue Founder Catherine Kelaher was one of the 13 arrested over the incident.

Speaking with Ben Fordham, she denies the allegations, but he’s not convinced.

Ben: “It’s not a good look when you’ve got animal rights campaigner being charged with animal cruelty Catherine.”

Kelaher: “No animals were killed or injured by animal activists yesterday.”

Ben: “They were killed though right?”

Kelaher: “They were killed by the farmer.

“If they died it was because they were about to die.”

Kelaher attempts to put the blame on the RSPCA and the police.

“The chargers are an attempt to take focus off the RSPCA and the police who have neglected to help the hens in this matter.”

13 people – eight women, four men and a 17-year-old girl­ – have been arrested and charged with:

– Commit an act of cruelty upon an animal;

– Steal or kill with intent to steal domestic animal or bird; and

One of the men, aged 46, has also been charged with assaulting police, common assault and use offensive weapon with intent to commit indictable offence.

All have been bailed to face court in August.

The group has been posting ‘call to action’ videos on social media for several days and has continued to do so since the illegal demonstration. 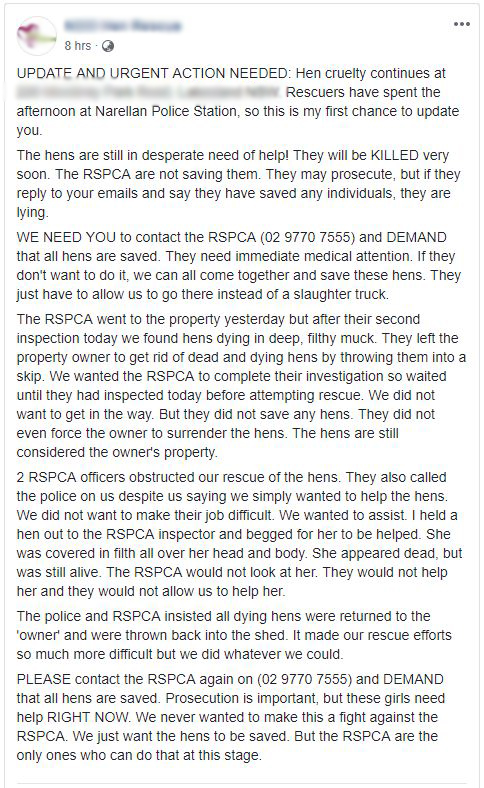