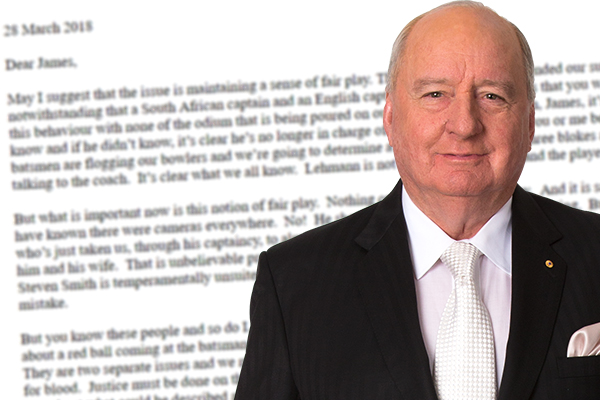 May I suggest that the issue is maintaining a sense of fair play. That is where we have offended our supporters and the cricketing world, notwithstanding that a South African captain and an English captain, amongst many others that you would be aware of, have been guilty of this behaviour with none of the odium that is being poured on our three players. And again, James, it’s not credible that Lehmann didn’t know and if he didn’t know, it’s clear he’s no longer in charge of the team.  Just imagine you or me being coach.  It’s lunch time.  The batsmen are flogging our bowlers and we’re going to determine a strategy to stop it and three blokes are fashioning this strategy without talking to the coach.  It’s clear what we all know.  Lehmann is not in control of the side and the players will tell you that.

But what is important now is this notion of fair play.  Nothing can condone what we saw.  And it is sad that young Bancroft said he should have known there were cameras everywhere.  No!  He should have known that this was cheating.  But we need to understand that Warner, who’s just taken us, through his captaincy, to almost number one in the world T20 rankings, has been the victim of awful behaviour towards him and his wife.  That is unbelievable pressure and it’s clear that the “leadership” has been of not much use to him.  I know that for a fact.  Steven Smith is temperamentally unsuited to deal with all the things that have been swimming around him.  So they’ve made this grievous mistake.

“I don’t think these blokes are cheats.  But they are guilty of cheating.”

But you know these people and so do I.  Warner and Smith occupy the crease for Australia in frightening circumstances.  You know all about a red ball coming at the batsman at 140 kilometres an hour.  I don’t think these blokes are cheats.  But they are guilty of cheating.  They are two separate issues and we must not be afraid to confront the public with that truth.  We don’t have to cave in to the “mob” baying for blood.  Justice must be done on the basis of the severity of the offence, and remember the ICC didn’t ban Bancroft.  And they have meted out what could be described as “the cricket world’s punishment”.  Are we facing double jeopardy here?  Punish them again?  Where else in the world of cricket has this happened?

So I’m writing to you because we must identify the severity of the offence but as in all cases where punishment is being determined, we must be just.  In a court of law, the defendant would be given very significant credit for his past record, for the contribution he’s made as an individual in areas relevant to his wider involvement in the world.  In other words, the punishment must embrace the notion of a fair go.  And James, our justice system enshrines the principle of a fair go even to our enemies, even to a murderer.

“I am in a way pleading with you not to throw these outstanding servants of the game under a bus, let alone run over them and leave them abandoned on the side of the cricketing oval.”

So I’m suggesting that this is an enormous challenge for Cricket Australia to be objective and fair in its decision-making and then accept the responsibility of communicating the response to the wider world knowing that there will be plenty who’ll want to be Mother Teresas and tell you that nothing will satisfy them but the cricketing death sentence.  I am in a way pleading with you not to throw these outstanding servants of the game under a bus, let alone run over them and leave them abandoned on the side of the cricketing oval.  That didn’t happen to du Plessis or Atherton or others.

The principle, I repeat, of fair play is the reason these blokes are in trouble.  So if we are such strong defenders of the notion of “fair play”, that must now apply as we seek to punish three young Australians.

As a former Australian coach I have great difficulty with reconciling how this behaviour would enter the culture of the team were it not for the fact that the management of the team is utterly inadequate.  If the coach was in control, then at lunchtime the players would have gone to the coach.  Someone would have said, “We have to get this ball to reverse, why not do X and Y” and a coach who’s in control would have simply dismissed it out of hand and told them to get out there and have confidence in your bowling attack and go after them.  Perhaps, James, if the bowling coach can’t deliver our attack to a level which can conquer the South African batsmen, perhaps we ought to get rid of the bowling coach and give the job to Brett Lee and Glenn McGrath.

Finally, James, talk of 12 months out of the game is absolutely ridiculous.  We need a sense of proportion here.  So far everything is “over the top”.  We must not yield to the Mother Teresas.

If at any time you’d like to discuss this on air, not for my benefit but to properly ventilate the fact that cricket has an outstanding future, then my programme is available.

And just on this outstanding future, may I say this?  Tim Paine was always and will always be a splendid choice as a leader.  I know the man well.  As a result of injury he’s been to hell and back.  He is gifted and classy.  He’s the man to restore all of this.  Make Patrick Cummins vice-captain and give the coaching job to Justin Langer and the cricketing world in Australia can be immediately turned around.