A Young Liberal who is volunteering for the Jason Falinski campaign has been verbally abused whilst hanging up posters of the MP.

21-year-old Sarah Halnan was attempting to support Falinski’s campaign until a member of the public came over.

“There’s no room for this sort of abuse in our community,” Jim said.

Press PLAY below to hear the full comments from Sarah

I do not know the man in the video. The 1,100-plus volunteers involved in our campaign all sign a code of conduct that ensures they adhere to the highest level of integrity and pledge to lead a positive and polite campaign. Anyone who breaks that code of conduct is removed from the campaign. It is really important that everyone in Mackellar, and across Australia, engages in respectful debate during this election. Unfortunately, we have seen the level of political discourse in this country get lower and lower and that comes directly from the top. When you have a Prime Minister who refuses to set high standards, is willing to break promises and to be dishonest, it is no wonder temperatures are rising in our communities. 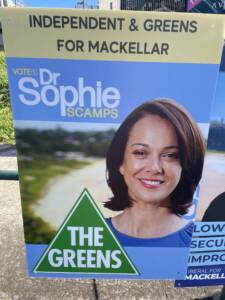 “Dr Scamps is not a member of the Greens – so who is putting those fake posters up?” Jim said.

Jim Wilson has implored all sides to “lower the temperature in this campaign”.

Statement from Dr Sophie Scamps
We’ve seen today in Mackellar more dirty tricks in the form of illegal advertising which breaks electoral laws. Restoring integrity and decency in politics is one of my main aims and one of the first things I will do is to back the Stop the Lies Bill to make it illegal to lie in political advertising.

Statement from Jason Falinski’s team
As per the NSW Liberal party statement, we have no prior knowledge or involvement in these actions [hanging up illegal posters]. Anyone who says otherwise needs to show proof. The best way to beat Climate 200 is for people to know the truth. They’ll keep taking the low road, while we keep taking the high road. Ever since the Climate 200 candidate announced their candidacy in Mackellar, people on the Northern Beaches have been subjected to ever increasing amounts of political vandalism, graffiti, horrid abuse that has culminated with one of their volunteers being charged with assault.