The vision is from 2015, when he was a ruckman for the GWS Giants.

Mumford can be seen seated in front of a table with five thick lines of white powder in front of him.

As several other men chant “sausage”, Mumford’s nickname, he bends over and snorts the thickest of the lines.

Click PLAY below to see the video – STRONG LANGUAGE WARNING

Mumford retired from AFL at the end of 2017 due to injury but has reportedly been considering a comeback.

The 32-year-old stayed on at the Giants last season, employed as an Assistant Coach. 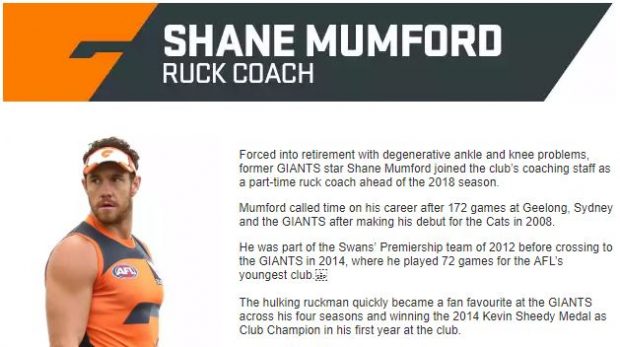 The Giants have confirmed the incident in a statement to Macquarie Media:

“The club is extremely distressed by the footage and views Shane’s actions as completely counter to the club’s values.

“Shane has expressed deep remorse, embarrassment and distress in relation to his actions.”

The GIANTS are aware of an incident, and associated video footage, regarding Shane Mumford from three years ago.

The club understands the incident took place in 2015 shortly after Shane had suffered a season-ending injury in round 11 that year.

The club is extremely distressed by the footage and views Shane’s actions as completely counter to the club’s values.

The club is disappointed in Shane’s choice of actions at this time and also understands that Shane requires a level of medical support with his health and well-being in mind. The club will be working with Shane to ensure he engages in a rehabilitation program along with a range of other measures.

Shane has expressed deep remorse, embarrassment and distress in relation to his actions. He understands he has let himself, his family and the club down and caused great embarrassment to those around him.

The club has kept the AFL informed of this matter.