Virgin Australia backing down from ‘cheesy’ decision to honour veterans 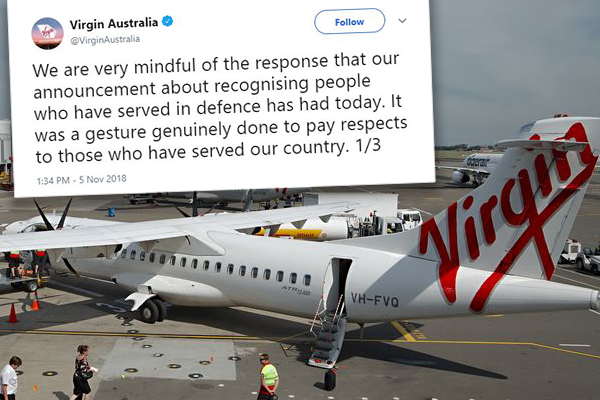 Virgin Australia is backing away from a decision to honour veterans, after widespread backlash in the defence community.

The airline announced plans to offer current and ex-servicemen and women priority boarding and acknowledge them once onboard.

The move was immediately endorsed by the Prime Minister, but there’s been push-back from veterans.

The Defence Association argues it’s a “tokenistic” gesture borrowed from the United States, with no evidence it’ll suit Australian customs.

In response, the airline announced it’ll consult with defence groups over the coming months and won’t proceed with the idea if it’s not supported.

We are very mindful of the response that our announcement about recognising people who have served in defence has had today. It was a gesture genuinely done to pay respects to those who have served our country. 1/3

Over the coming months, we will consult with community groups and our own team members who have served in defence to determine the best way forward. 2/3

If this process determines that public acknowledgement of their service through optional priority boarding or any announcement is not appropriate, then we will certainly be respectful of that. 3/3

He tells Ben Fordham while there is goodwill in Virgin’s decision, “it sits uncomfortably with me, and certainly with a lot of my colleagues.”

“I just don’t think there’s been enough consultation over the last couple of weeks with veterans groups to find out what’s at the top of our lists.”

Mr Brown is suggesting airlines allow people to donate their Frequent Flyer points to veterans and their families.

“That’s something that we’ve asked from airlines before.

“Give veterans and their families a discount or set a commitment to employ a percentage of your workforce from the veteran community.

“Those are all tangible things that can be done.”

He says his number one priority is “getting the number of veteran suicides down.”

The Minister says it’s important to acknowledge “none of this is compulsory”.

“Virgin has done this in the right spirit.”

“I think that’s to be applauded.”

If you or someone you know needs help, contact Lifeline on 13 11 14