Three people have been injured, with one in a critical condition, after a ute crashed into a bus shelter in inner-city Sydney.

Three pedestrians were waiting at the bus stop opposite Broadway shopping centre on Parramatta Road when the ute ploughed into the shelter at around 1.30pm. 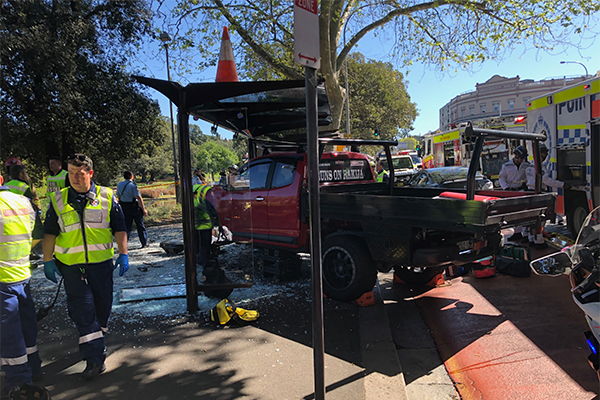 The three men were all trapped for a short time before being freed and taken to hospital.

One of the men, aged in his seventies, is now fighting for his life.

The driver was also briefly trapped but has since been taken to hospital with minor injuries.

“We have one 70-year-old gentleman who is critical.

“Three other patients are in a serious condition.”

Motorists are being advised to avoid the area due to heavy traffic.

BROADWAY: 1 of 3 westbound lanes is closed on Parramatta Rd at City Rd due to a crash involving a ute and pedestrians. Slow down as emergency services are on site. Traffic is heavy in the area so give yourself extra travel time.