The top baby names for 2019 have been revealed with the most popular boys’ and girls’ name remaining unchanged once again.

The NSW Registry of Births Deaths & Marriages has compiled the top 10 names of last year, with Oliver and Charlotte coming out on top.

It’s the sixth year in a row Oliver has topped the list while Charlotte has been the most popular for the last three years.

Noah, William, Olivia and Mia round out the top three in each gender. 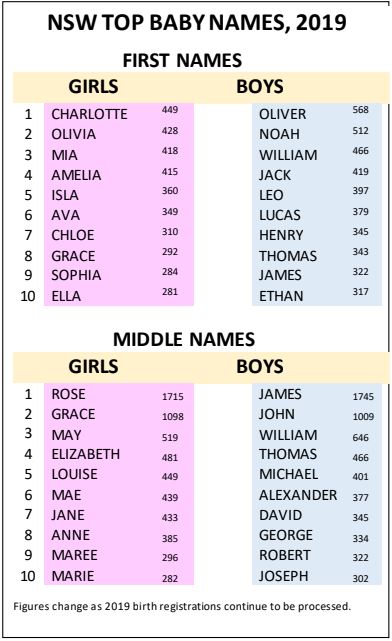 The top names have remained consistent in recent years but they far less popular than in decades past.

BDM data also revealed the top middle names with James, John and William most popular for boys and Rose and Grace for girls.

Parents have 60 days to register their newborn’s name, establishing the child’s legal identity.

A final list of the top 100 baby names will be published in April.