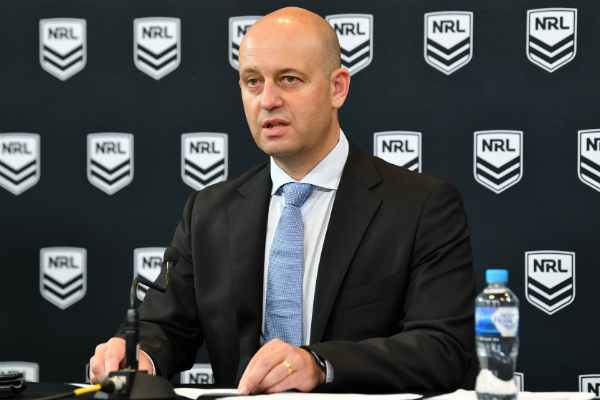 NRL CEO Todd Greenberg has come down hard on Ben Barba in the wake of his sacking from the North Queensland Cowboys on Friday.

Barba had his contract terminated after allegations of domestic violence against his partner emerged – stemming from an incident over the Australia Day long weekend at a Townsville casino.

The 29-year-old – who signed a one-year deal with the club for the 2019 season – was allegedly captured on CCTV cameras attacking partner, and mother to his four daughters, Ainslie Currie.

The incident is now under police investigation, although Barba’s alleged indiscretion has meant he has paid the ultimate price for a “a significant breach” of his contract.

Greenberg applauded the Cowboys’ swift action over the matter.

“I think that’s the type of leadership around our clubs that we continue to need and we will follow that suit obviously pending us seeing the same footage,” Greenberg said.

“We have made it very clear over the years that when there are really difficult criminal matters or issues of these integrity matters, we will allow the courts to deal with them.

“But when we are presented with clear evidence ourselves particularly vision or footage, we will act immediately which we are doing today.”

The game’s boss also made it clear if there is evidence to support the allegations against Barba, he won’t be welcomed back into the NRL.

“The simplest way I can put it is any violence towards women from people within the game or otherwise are no longer welcome back in the game,” Greenberg said.

“We’ve made that stance pretty clear.

“I’ve had a conversation with all 16 club CEOs and importantly all 16 captains and I said they shouldn’t be looking backwards on the type of sanctions that we’ve realised, they should be looking forwards.

“If we need to make some difficult decisions, I don’t personally think it’s difficult if it’s violence against women, they simply no longer have a place in the game.”

Barba was set to line up for the Indigenous All-stars on February 15 against the New Zealand Maori All-stars side. Bevan French has taken his place in the side.

The Dally M Medallist has spent the past couple of years overseas after his second illicit drugs strike following Cronulla’s 2016 premiership victory.

It is likely Barba has now played his last game in the NRL.

John Stanley and Paul B Kidd