The Angels ready to rock the house down tonight before touring

Australian rock royalty, The Angels have announced their rescheduled tour dates for 2022 for both the ‘Darkroom Recharged’ and ‘Greatest Hits’ tours.

Darkroom Recharged is a four-to-the-floor rock show in the great tradition of Aussie pubs and clubs.

View the tour dates below 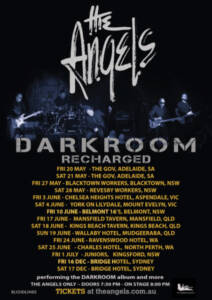