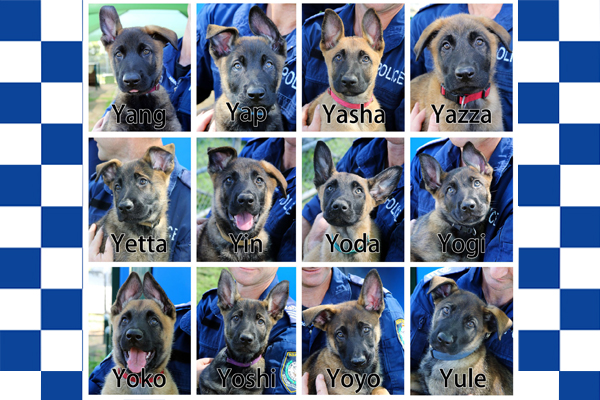 Several years ago a handful of K9 recruits were named after members of the Continuous Call Team… The Big Marn, Bolts and Bozo.

Then in 2016 two police puppies from the ‘W litter’ joined Ray in the studio, causing mayhem. See the video below

Ray helped auction off the naming rights for those puppies, raising money for the family of fallen Sergeant Geoffrey Richardson.

Well today, another litter of puppies need names with patients of The Children’s Hospital at Westmead making the final decision for 12 ‘Y litter’ pups.

They are the first litter of Belgian Malinois dogs born into the unit’s breeding program.

“There’s some really good names there Ray. The community chipped in and helped out with hundreds of suggestions.

“They’ve got a very extensive training program ahead of them for the next 12 to 18 months and we’re confident that we’ll have quite a few of these puppies reach operational status.”

Police Commissioner Mick Fuller’s wife Andrea is a patron of the Dog Unit and says the kids did an incredible job.

“A lot of thought has gone into the names and a lot of the characteristics that these really brave children carry will also continue in the names of the puppies.”

Here are the names and the kids’ reasons for choosing them:

Yogi was named by Azeem because it is short to say.

Joy chose the name Yoda because he loves Star Wars movie and he thinks it represents a powerful and strong animal.

Yin was named by Nikita, as she believes the name is honourable and pure.

Yule was named by Lorelai because it’s a great name.

Angela named Yoko because there was a strong and brave girl who died in the Hiroshima bombs.

Two children – Alisha and Isabella – chose the name Yoyo because they think the dogs will go up and down when they are working.

Yasha, meaning “to live” was chosen by Sandra.

Yazza was chosen by Munty because it’s a good Aussie name.

Yoshi was named by Chase because of the Mario cart character who he thinks is really fast.

Jai chose Yang because of the Yin and Yang connotation.

Yetta was chosen by Joshua because he believes it sounds like a brave dog who has a good sense of smell.