Ray Hadley and Bob Fulton have announced they will step away from the Continuous Call Team, after more than 30 years.

Founded by Ray in 1987, the show has dominated the ratings for three decades, first at 2UE and then switching to 2GB in 2002.

Rugby League immortal Bob Fulton has been with the Ray for 32 of the Continuous Call Team’s 33 years, forming an unbreakable bond on and off the radio.

Following the sudden death of founding CCT member Peter ‘Chippy’ Frilingos in 2004, Ray and Bob made a pact. When one of them walks away, they both will.

And as Bob says to Ray Hadley in a farewell chat on his morning show, “it’s time”.

Bob is looking forward to spending weekends with his eight grandchildren and with Ray, outside of a radio studio.

“We’re best mates and our friendship is everlasting.”

Ray Hadley paid tribute to his great mate and all his CCT colleagues over the years saying, “it’s hard to put into words” how much the show means to him.

“I have never, ever met a more loyal friend and colleague than Bob Fulton.”

Click PLAY below to hear Ray and Bob’s full chat

Ray and Bob’s decision will allow the next generation of broadcasters to take the lead, most notably Mark Levy who has been filling Ray’s shoes on a part-time basis for several years now.

From 2020, Ray and Bob will remain in touch with the CCT, acting as consultants and advisors, with Ray continuing to call State of Origin games and the NRL Grand Final.

Further announcements regarding the 2020 Continuous Call Team lineup will be made in the near future. 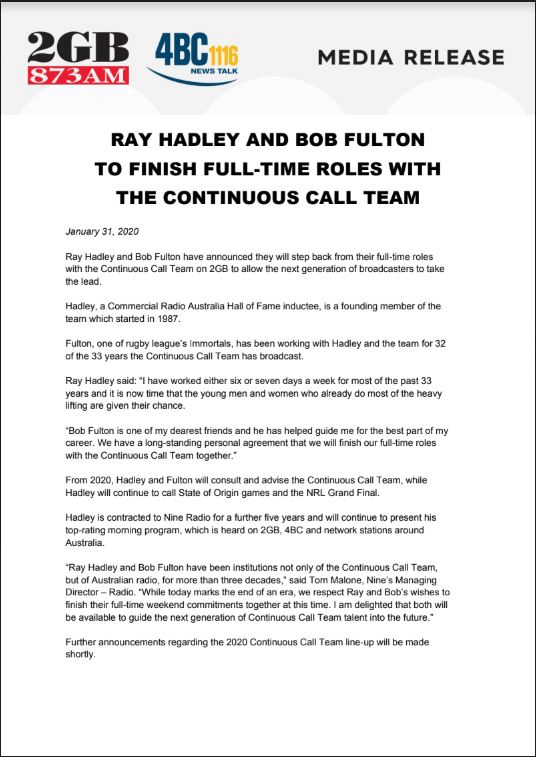