Following European settlement, the growth of the new colony of New South Wales led to an increasing demand for arable land.   Governor Lachlan Macquarie supported expeditions to open up new lands to the south of the capital Sydney, including one to find an overland route to Jervis Bay, an area which would later be incorporated into the ACT as its only coastal possession.

In 1818 Charles Throsby, Hamilton Hume, James Meehan and William Kearns set out to find the route, a task accomplished that same year by Throsby and Kearns.

The 1820s saw further exploration in the Canberra area associated with the construction of a road from Sydney to the Goulburn plains, supervised by Throsby and his overseer, Joseph Wild.

While working on the project, Throsby learned of a nearby lake and river from the local Aborigines, and he accordingly sent Wild to lead a small party to investigate the site.

On 19 August 1820, Wild ventured off from his two companions, and later that day arrived at the north shore of what is now known as Lake George.

In October 1820 Governor Macquarie visited the site, and while he was in attendance Throsby decided to push on to reach the river of which he had been informed.   Accompanied by Wild and James Vaughan, he journeyed south in search of the Murrumbidgee.

The search was unsuccessful, but they did discover the Yass River, and it is surmised that they would have set foot on part of the future ACT. 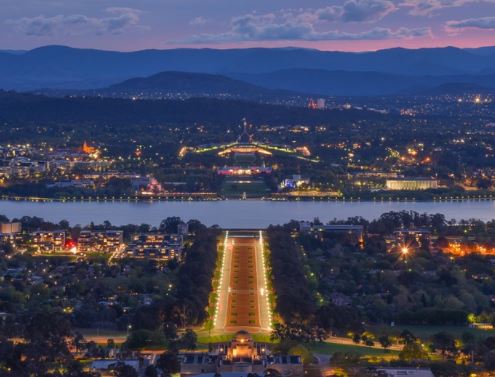