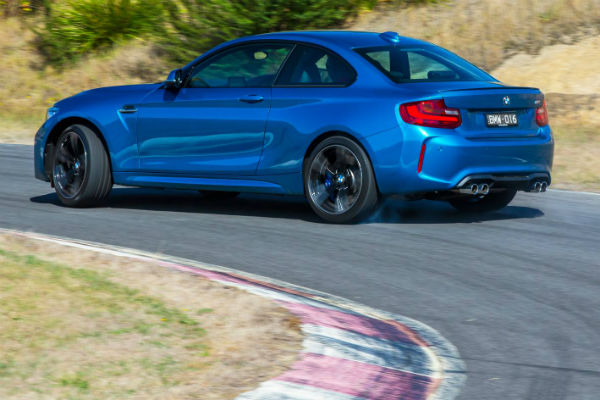 Sometimes just sometimes in this game you come across a car you could live with. I did last week with BMW’s M2 Coupe – M standing for Motorsport edition – in fact the M2 is the most affordable BMW M car on the market – $90,500 in six-speed manual Pure version as tested, 99,500 in the better equipped seven-speed dual logic automatic. Stylish yet conservative in the BMW tradition, the M2 Coupe is typically classy, a performance coupe with pumped up rear guards, a chrome tipped quad exhaust, massive drilled disc brakes and muscular double spoke 19-inch alloy wheels. It’s designed to perform and that it does – a 3.0-litre turbo six-cylinder engine helping it reach 100km/hour in just 4.5 seconds.

Three drive modes – Comfort, Sport and Sport + which don’t not alter the M Sport suspension setting as the ride remains top class in all three modes. A nicely weighted clutch was fine in Sydney’s clogged traffic however the manual shift itself is rather notchy. From my point of view I‘d have the seven- speed auto version with manual shift paddles despite the $9,000 price hike – despite its sporty pretensions however the BMW M2 can be driven in a rather docile manner around town. Called on to perform on a windy road it soon unleashes an amazing performance with superlative engine performance, handling and braking. I generally think BMW’s dashboards have not moved with the times – for example a sporty car like this should have head up display for quick reference. I’m David Berthon