The Queensland leader of One Nation, Steve Dickson, has resigned following the release of footage of him at a US strip club.

The video, filmed as part of the Al Jazeera investigation into One Nation’s dealings with the National Rifle Association, shows Dickson groping women and making lewd comments in a Washington strip club.

In the footage, Dickson was filmed making disparaging comments about Asian women and propositioning a strip dancer.

He has since issued a statement, apologising for his behaviour and thanking his wife for her support.

“The footage shown does not reflect the person I am,” the statement read. “It shows a person who was drunk and not in control of his actions and I take full responsibility for allowing that to happen,” (full statement below).

One Nation leader Pauline Hanson has accepted Dickson’s resignation and distanced herself from him.

“The footage I saw last night cannot be ignored or condoned,” she said.

“I wouldn’t tolerate my own children behaving this way towards women, and I cannot and will not condone my own candidates dealing with women in this fashion either.”

Al Jazeera says it did not give A Current Affair permission to use the vision of One Nation Senator Steve Dickson at a strip club.

In a statement, Al Jazeera said it did not release the footage because it “did not consider it in the public interest”. 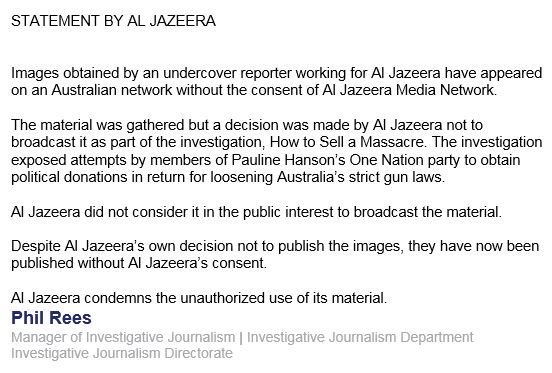 It’s less than three weeks until election day, but one senior politician has given his leader a huge headache. #9ACA | https://t.co/JqzwiGTmru pic.twitter.com/Zex4ocD575