A major crash has injured two people and caused chaos on roads in Sydney’s north.

Just before 6am, a truck and a ute collided on Lane Cove Road at Macquarie Park, just north of the M2 off-ramp. 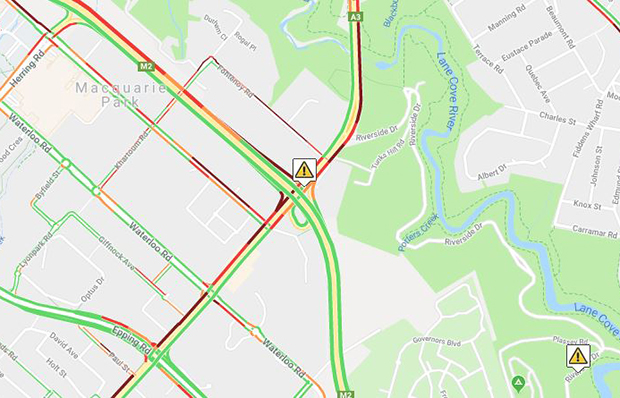 The truck driver was trapped in the wreckage for over an hour before being taken to Royal North Shore Hospital with multiple fractures.

The man driving the ute was taken to hospital with shoulder and neck injuries.

The truck was carrying scaffolding and dozens of bags of cement powder, which spilled across the busy road.

Several lanes were closed in both directions, but have since reopened.

UPDATE | All lanes have just reopened on Lane Cove Rd.

There are still major delays for motorists!

Northbound traffic was queued for seven kilometres, all the way past the Rhodes Ikea, towards the M4 motorway.

Southbound traffic was queued more than five kilometres, back to St Ives.