Luke Grant has ripped into the Prime Minister on Drive, questioning his absence during the current flood crisis.

Upon his return to Australia, the PM was grilled at a press conference about his travel and Labor’s criticism of Scott Morrison during his time in office.

“You didn’t have to go to Paris and kiss monsieur Macron on the croissant,” Luke Grant said.

“You’ve made the bed Ablo … you’ve set the standard and people are going to hold you to account.”

Luke later criticised the PM for stopping in at 6PR in Perth for a chat and a slice of pizza. 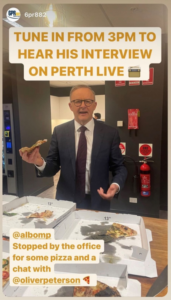