‘It turned into a religious war’: Liberal Party meeting erupts into street brawl 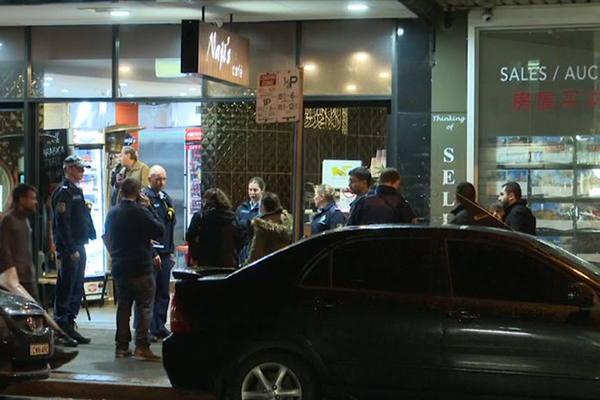 A New South Wales Liberal Party branch meeting has ended in a brawl which is now being investigated by police.

Tables and chairs were used as weapons as the ugly fight spilled out of Naji’s cafe at Arncliffe in Sydney’s south, and onto the street just before 7pm.

The brawl is understood to have started when a group was denied entry to the meeting, amid a factional turf war.

A man, believed to be in his 40s, was taken to hospital with minor injuries but numerous others were seen running off as police arrived.

In a statement, the Liberal Party says it will cooperate with police, and carry out an internal investigation.

Liberal Party member ‘John’ was there to attend the meeting and tells Alan Jones it was a “religious war”.

“It was an absolute disgrace, it was basically thuggery.

“A few words erupted and then basically from there it turned into a religious war between Christians and Muslims.

“Muslims attacked one Christian guy, there was about 10 of them. Got him to the ground, stomped on his head, got chairs, smashed him across the head, kicking him, table across his head.

“There was an elderly woman that was punched, they were thrown to the ground. There were children there that were obviously traumatised.

“Some of the guys from the Islamic faith were saying f*** off Christians, f*** Coptic dogs. They were there to intimidate.”

Another Liberal Party member Andrew phones Alan supporting John’s version of events, telling Alan they were stopped from entering the meeting and voting.

Click PLAY below to hear ‘Andrew’s’ version of events

Jane was also at the meeting, telling Alan it was a disgrace.

Amid allegations the brawl was religiously motivated, he says he’d be “extremely disappointed if it was”.

Click PLAY below to head the full interview below

Former longtime Liberal member and activist John Ruddick tells Ben Fordham this isn’t the first time a branch meeting has become violent, claiming a gun was pulled at a similar assembly a few years ago.

Mr Ruddick says the spat at Arncliffe can be boiled down to a conflict between “orthodox liberal” branches and the “left-wing lobbyist faction”.

He is adamant the chaos will continue until the party brings about democratic reform.

Click PLAY below for the full interview with John Ruddick

1/2. @LiberalNSW responds to reports of a brawl at a branch meeting at a cafe in Arncliffe: The Liberal Party has been made aware of an incident that allegedly occurred at a meeting tonight. The Party will fully cooperate with the Police in relation to their inquiries… #nswpol

2/2 “…An internal investigation will also be undertaken and disciplinary action taken against those responsible.
The Liberal Party strongly condemns the kind of behaviour that is alleged to have occurred.” #nswpol