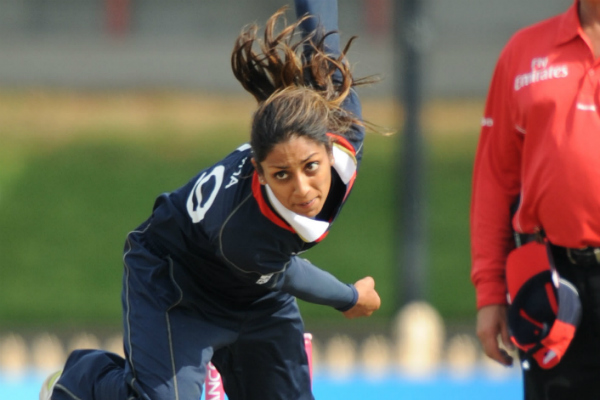 She’s become one of the faces of Fox Cricket’s summer of cricket coverage, but former English cricketer Isa Guha has revealed just how it all began.

Guha – who played eight Tests for her country and took 29 wickets after debuting as a 17-year-old – first had the opportunity to pursue a career in the Sports Media industry towards the end of her playing career in 2011.

The 33-year-old was presented with an opportunity to cover the IPL for ITV who needed a replacement for the pregnant – just two weeks out from the tournament beginning.

And since then Guha hasn’t looked back – playing a starring role covering the Border-Gavaskar trophy between Australia and India.

“I was still playing for England and this opportunity came about on Twitter, ITV who were showing the IPL needed a female host to work on the cricket because manzerra … was pregnant and they needed to find someone within two weeks of the tournament, so it was very last minute for them.

“They tried to look for an Asian girl who knew about cricket and I just happened to be around at the time, so I guess it was a bit of fate and timing, but they got me involved.

“When I went into the meeting, I’d originally thought they wanted me to commentate a bit, they hit me with the fact that I’d be presenting to half a million people on television which is something I’d never done before.

“It’s quite a difficult thing to do when you’re starting from scratch, I was looking at the wrong camera, I was really wooden in terms of my delivery, the one thing that kind of got me through it was my cricket knowledge and that’s how it all started.”

Guha said she was inspired by the likes of fellow former female cricketers Mel Jones and Clare Connor who had already made their names in the industry.

The former pace bowler also admitted it was great to see so many females getting the opportunities to pursue commentary careers.

“I was commentating very soon after that with BBC and Sky and then around the world and it really kind of took off over in India, I (also) worked in the CPL,” Guha said.

“It’s been a fantastic journey, it’s great so many women are getting so many opportunities now.

“It was never something that I thought seriously about until to I started getting the opportunities.”

She also topped the ICC ODI Bowling rankings midway through her playing career.